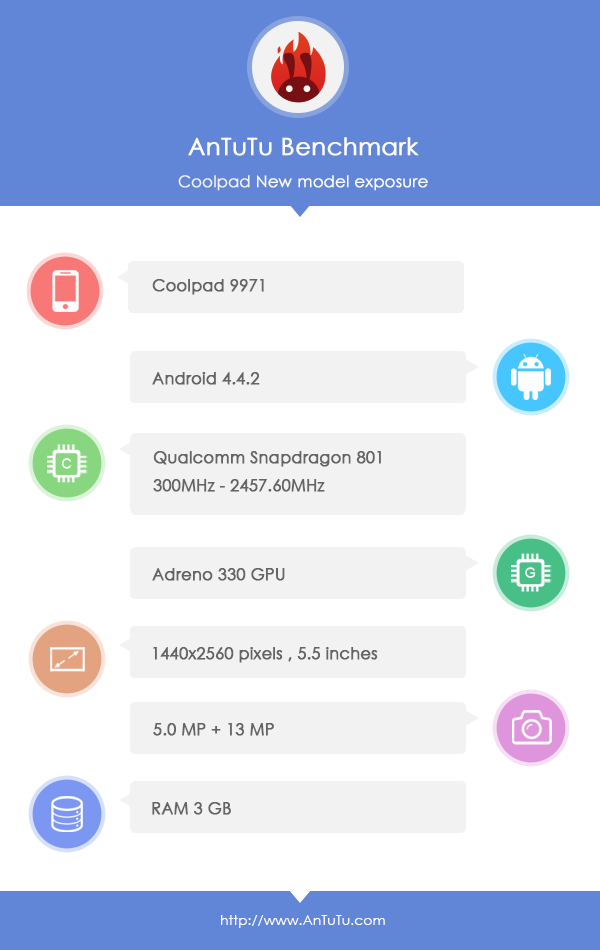 After the Coolpad 8675 leaked out and got certified by TENAA with some pretty good specs and an incredible AnTuTu score, here’s another Coolpad model ready to make waves. This one is dubbed Coolpad 9971 and it just leaked through a result and a list of specs via the same AnTuTu test.

The new model packs a 5.5 inch 2560 x 1440 pixel display, uses 3 GB of RAM, runs Android 4.4.2 and relies on a 13 megapixel main camera. It also has a 5 megapixel front shooter and scores as high as 37.379 points in AnTuTu, which is a few thousand more than the first tests of the Snapdragon 805-based version of the LG G3. Coolpad 9971 doesn’t have other features revealed, like a battery, microSD or storage, but I expect at least 16 GB of internal memory inside.

Also, judging by the hardware, a 3000 mAh battery wouldn’t hurt. If you Google Coolpad, you’ll see they deal in mostly lower end devices, some of them with uninspired designs. They also have the occasional phablet or tablet, sticking to already famous formulae, but they usually stack those up with good hardware.