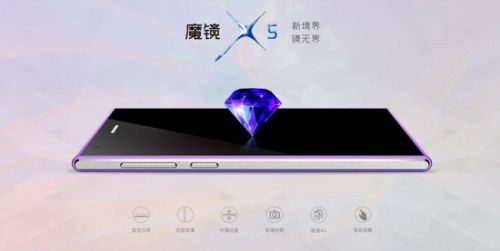 Desai has released its very first sapphire glass phone dubbed Desai Mirror X5 in China and this model is priced nicely, at $160. Sapphire glass was controversial last year, as one of the main companies that worked with this tech, GT Advanced was basically bankrupted by Apple.

The company behind this model is accepting online reservations for around 10.000 units. Apparently this is the first Chinese handset with a sapphire display, that costs less than $200. We already know that Huawei and Oppo had special Sapphire models, but they had a bigger price. The Desai Mirror X5 is a 5 inch smartphone, it come with Android 4.4 and a 1.5 GHz processor, as well as a front 5 MP camera and a back 13 MP shooter.

It also has a 2050 mAh battery, TD-LTE support and works on China Mobile’s GSM network. The device is created using chemical processes that apply the sapphire layer on thin glass substrates, using vapor deposition. Apparently, the resulting material is almost as hard as diamond.