Remember the Separate Keitai handset, made by Fujitsu and ready for sale via DoCoMo? The device, also known as Fujitsu F-04B was showcased in Barcelona last week, during MWC 2010 and we got to see a video demo of the handset, that you’ll find after the break. 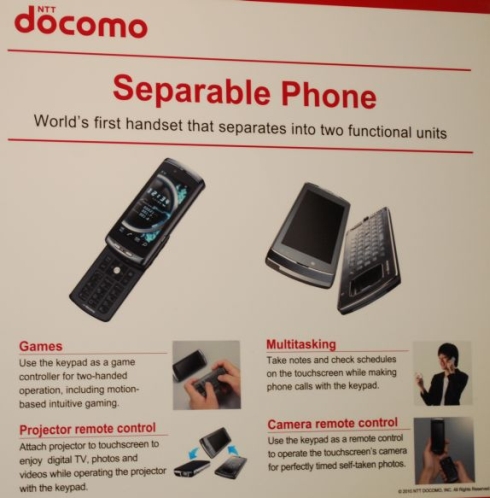 We remind you that this phone is able to separate into 2 segments, one with the 3.4 inch touchscreen display and the other one sporting a numeric/QWERTY keypad. The screen section also includes a 12.1 megapixel camera, an inner camera, an accelerometer, it plays videogames and comes with an e-wallet feature.

You’ll also find an accelerometer on the keyboard segment and you should know that the two modules are connected via Bluetooth and united via magnet. Separate Keitai’s battery offers the user 500 minutes of talk time and 2000 hours of standby functioning and the release date for the handset is scheduled for March or April, with a $660 price tag.