The E-Boda Eruption V200 is a quad core smartphone that was launched this summer and we reviewed it in detail when the fall began. The product was priced back then at $280 and I bet you can find it for as low as $230 now. This is dual SIM quad core phone and the very first phone from the company E-Boda. 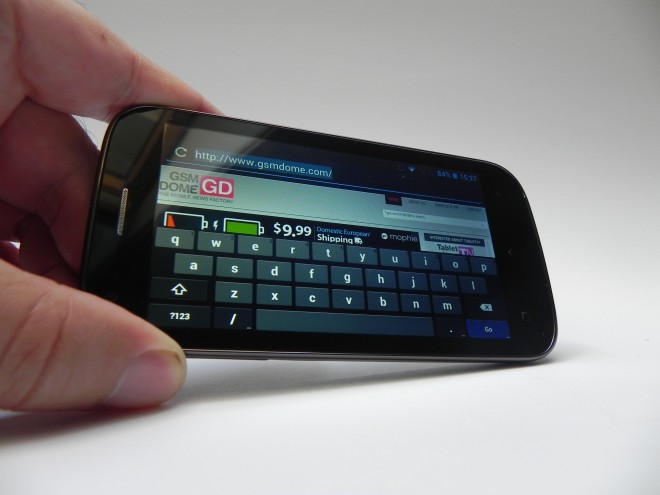 As far as the design goes, the handset measures 8.9 mm in thickness and weighs 124 grams. It comes with a black or white back panel and it has a nice design, that makes me think of a Lumia phone or modern Alcatel unit. We’ve got a big lens in the camera area and the device kind of leans on it when placed on a flat surface.

Upfront there are 3 capacitive buttons, an earpiece and the front camera and as far as the design goes, I noticed that the corners are quite rounded here. E-Boda Eruption V200 Quad Core has a slippery plastic case, but also one that’s pretty resilient and the device sits well in the user’s hand. Its specs list is quite good, with a quad core MediaTek MT6589M processor clocked at 1.2 GHz, a PowerVR SGX 544 GPU, 1 GB of DDR2 RAM, 4 GB of storage, of which 2 GB are available to the user. 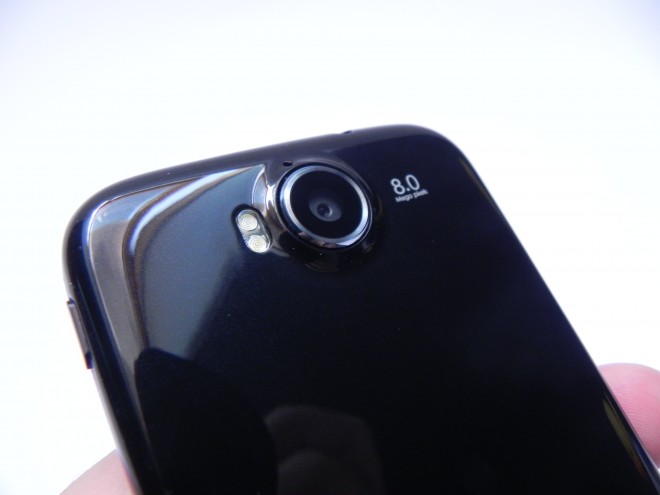 There’s a microSD card slot here, with a capacity of 32 GB and at the front we find a 4.5 inch IPS display with a resolution of 960 x 540 pixels. The V200 supports WiFi dual band connectivity, DLNA, WiFi Direct, HSDPA+ with 21 Mbps speed, Bluetooth 4.0 and it has an 8 megapixel back camera with dual LED flash, plus a front 2 MP shooter.

There’s GPS on board, a G sensor with 3 axis and a proximity sensor. The battery here is a 1800 mAh 3.7 V unit, that on paper provides 144 hours of standby functioning and 630 minutes of 3G talk. In our tests the device charged from 0 to 100% in 2 hours and a half and as far as usage goes, the battery provides 4 hours of gaming or 5 hours of video playback. 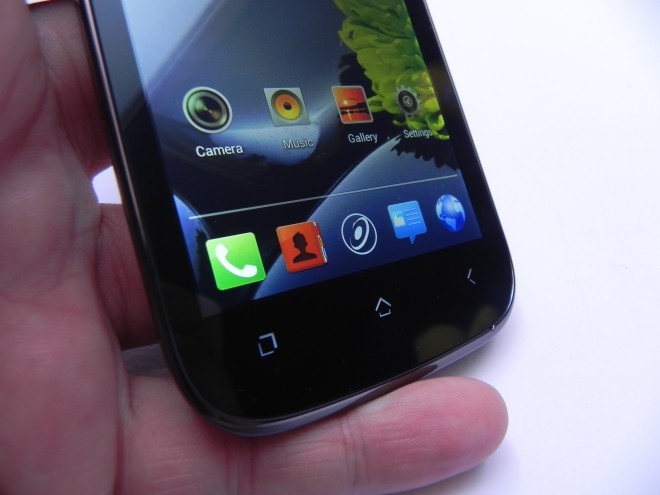 The battery could have been better, but having seen the Nexus 5 achieve only 4 hours of video playback, I’ll say we’re doing fine. Moving on to the multimedia experience, we’ve got the option to enhance the audio experience from the settings and now let’s check out the acoustics. First of all, the headphones are very good, we’ve got an excellent bass, but they’re a bit uncomfortable to use.

The speaker is easy to muffle by mistake and the audio is good overall, but it’s less impressive than the one of local rivals Allview. We’ve also got FM radio available here and moving further to the video side of things, the screen here is a 4.5 inch IPS with a resolution of 960 x 540 pixels and it outputs vivid colors and 307 lux of brightness, so it’s pretty bright. 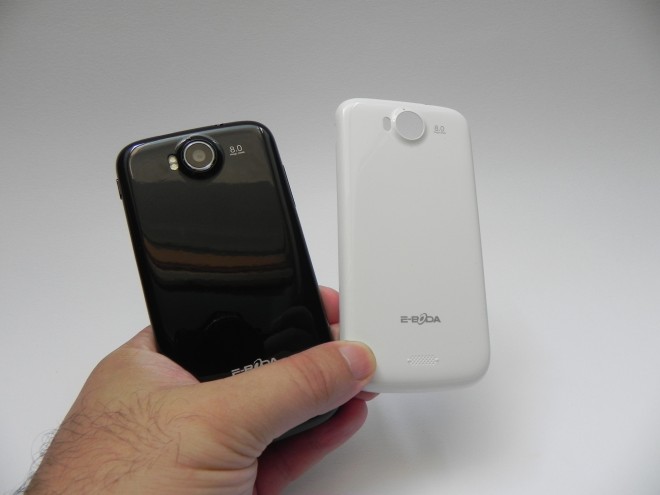 It’s even brighter than the Galaxy S4 if you really want a comparison. The screen features an RGP Stripe pixel arrangement and it’s slightly white-ish, just like the Xperia Z handset. We’ve got good view angles, decent sunlight behaviour and the screen here is similar to the one of the Allview P5 Quad. Moving on to the camera, this is an 8 megapixel unit with dual LED, autofocus and a lot of useful options like effects, exposure, colour, scene mode and it also supports Full HD video capture.

There’s burst shot available here, panorama and we achieved some decent closeups. The video is filmed with 3GP compression and sometimes it tends to lose focus. The pics and videos suffer from a slight oversaturation and HDR tends to be a bit exaggerated, making everything too white. Overall, the camera is good when taking pictures in normal mode in daylight, actually better than most midrange units. 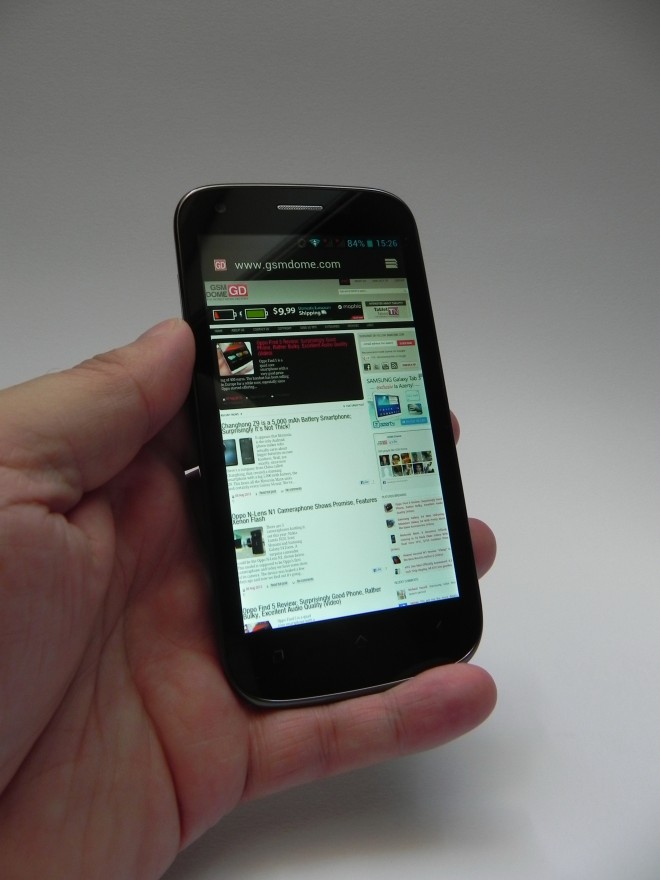 On the OS side there’s Android 4.1.2 with a standard web browser that feels kind of sluggish, which is confirmed by the low score in BrowserMark 2.0: 1628 points. Speaking of benchmarks, I tested this model in a variety of benchmarks and compared it to the Allview P5 Quad and Prestigio Multiphone 5044 Duo, two other quad core handsets with Mediatek CPUs.

In Quadrant the E-Boda V200 scored 4037 points, getting beaten by the Allview and beating the Prestigio by 100 points. In AnTuTu we scored 13.307 points, which is very close to the 13k+ also scored by the other models. The GPUs produced the same 49 FPS for V200 and Allview, but the Prestigio dropped to 45.8 FPS. Finally, in Vellamo we scored a decent 1412 points and in 3DMark we achieved 2678 points. 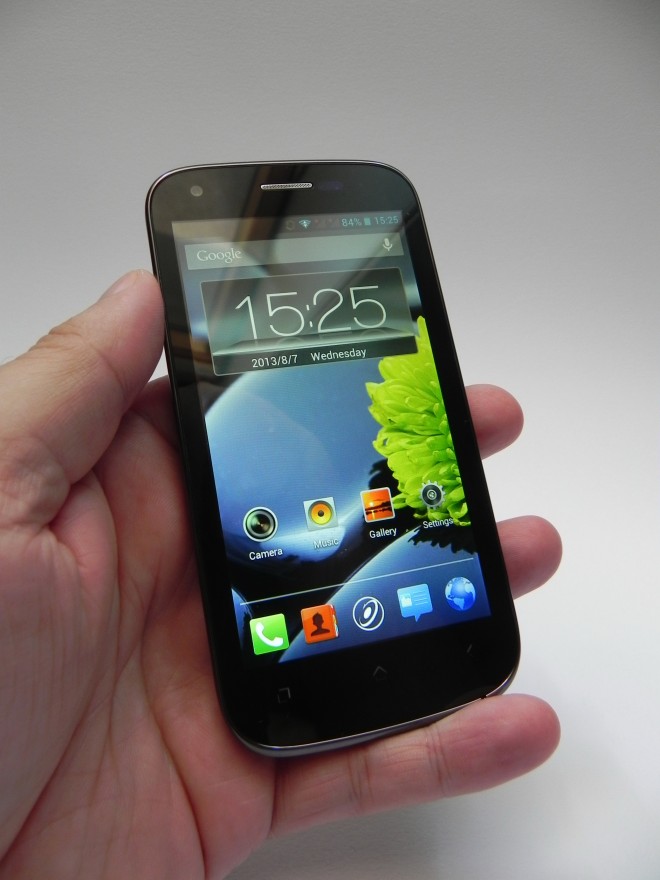 In the settings area you’ll find an economize mode for the battery and a tweak that E-Boda has performed is the set of system sounds available on the device, that have a certain sci fi ring to them. The V200 offers pretty good call quality and as far as software goes, we’ve got the stock Android here, aside from the icons, system sounds and the effects. The preinstalled apps include a File Manager, calendar, notebook, sound recorder, 1 Mobile Market (an app store that copies Google Play), Adobe Air and Adobe Reader.