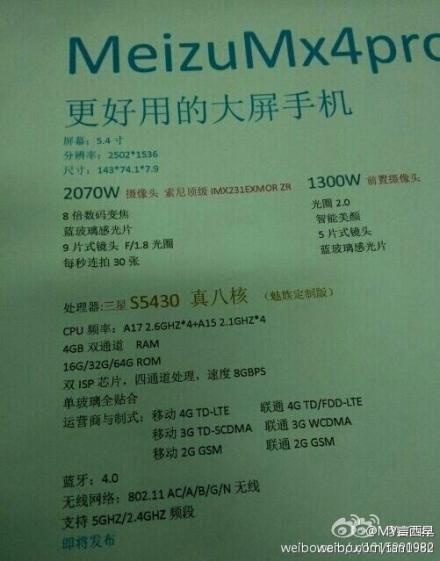 After the early September launch of the Meizu MX4 Standard, it’s time to wait for the Pro device to come and also time for the Mini to debut. Meizu promised at some point that there will be a fresh device release every month from now on, so we’re gearing up for the October release. Said debut may be related to the Meizu MX4 Pro, that has just leaked.

We only have a document here, one that confirms a few specs, including a custom Samsung processor and… 4 GB of RAM! This could actually be the very first smartphone with that quantity of RAM, that was expected to be available on the Galaxy Note 4, but didn’t happen. Meizu MX4 Pro features a 2560 x 1536 pixel display, a 13 megapixel front camera and a back 20.7 megapixel shooter.

Inside the handset there’s a custom version of the Samsung S5430, according to the leak. This one is an octa core unit, with a quad core 2.6 GHz part and a quad core 2.1 GHz part. 4G connectivity is also mentioned, as well as 16, 32 or 64 GB of storage. Is this the Note 4 killer?