Take this one with a big grain of salt… It appears that the first price tag for the Nexus Prime aka the Samsung Galaxy Nexus has appeared… and it’s big. Mobile City Online has somehow posted an unannounced handset up for pre-order with a price of $749.99, supposedly down from the amount of $949.99, that’s the scary retail price. 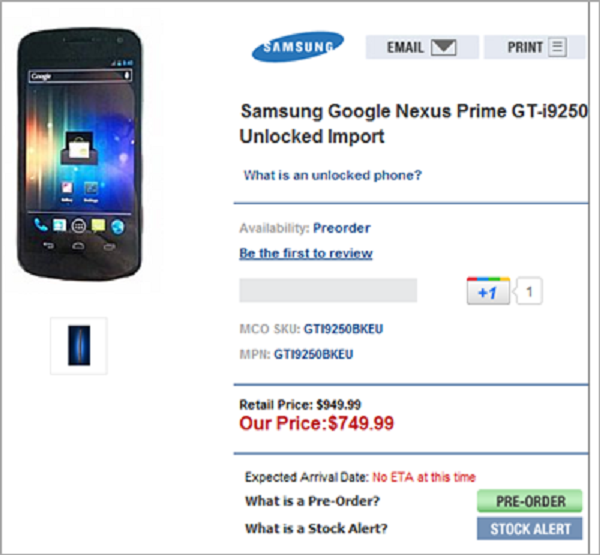 This may be the long awaited first Android Ice Cream Sandwich phone, but I can’t see why anyone would spend almost $1000 on it… Even $700 is a huge amount, so this may somehow be a wrong piece of information. Unveiling next week in Hong Kong, the Nexus Prime has been a lot in the news lately with leaked pics, screenshots and videos, so right now it only has minor secrets from the public.

Some other details listed here lead me to believe that is fake: the lack of shipping date, the mention of an 8MP camera (my source says 5MP) and the presence of TouchWiz 4.0 UI. Google would never agree to give up the stock Android on a fresh handset with a brand new OS… so why put TouchWiz on it instead of stock Ice Cream Sandwich, right?