I was sure that yesterday’s leak about the $700+ Samsung Galaxy Nexus was pure speculations, since not even a futuristic Ice Cream Sandwich phone would cost that… Now, the info is confirmed by a Verizon leak, showing a price tag of $299.99 for the Nexus Prime/Galaxy Nexus and the same amount for the HTC Vigor/Rezound. 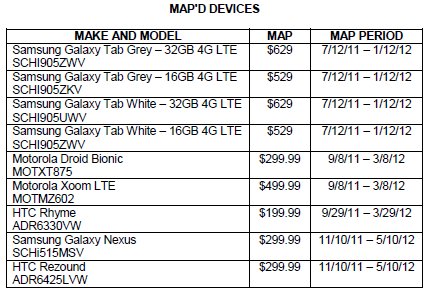 Let’s hope that the handsets won’t be launched in the same time frame, since they would compete against each other, as well as against the Motorola Droid RAZR, that will be announced on the 18th by the same carrier. Paying $300 upfront and probably a major amount each month of use of the LTE service is a sacrifice you’ll have to make over the following months.

While the Nexus Prime will be announced on the 19th, HTC Rezound is still a mystery and everything we know about is that it’s a dual core LTE 720p display phone, enough to induce some serious drooling on our part. The supposed launch date for both this models is around November 10th, according to the same leaked table.