AT&T announced no less than 4 QWERTY phones today, so texting freaks will be satisfied by the carrier’s portofolio. Among those phones there’s also a dual slider and a Pantech device known as “the world’s thinnest device with a full QWERTY keypad”. 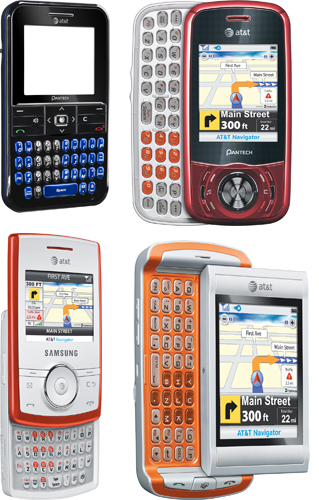 Let’s have a look at the new phones now… Pantech Matrix is available in blue or green (soon red) and it’s a two way slider (vertical sliding reveals a numeric keypad, side sliding reveals the full QWERTY keypad). The handset supports 3G connectivity, AT&T Navigation, Video Share and it features a 1.3 megapixel camera. Matrix can be yours for $79.99 on contract and rebate.

Passing on to Samsung Propel, this is a 3G device, packed with AT&T services, a 1.3 megapixel camera and the same $79.99 price and availability in blue, green, red and white with red accents. Pantech Slate is the third of the bunch, the above-mentioned champion of slimness, available in late October, together with Propel.

Slate will cost $49.99 with a contract and on its specs list you’ll find the same 1.3 megapixel camera, but no high-speed data connectivity. Last, but not least comes Quickfire (or Knick), available starting November, with a Sidekick design and a touchscreen plus QWERTY keyboard and 1.3 MP camera. This 3G beauty goes for $99.99.