For those of you who make their own gadgets and handsets, here’s the perfect example of an “Inspector Gadget” phone, that allows its user to make calls simply by using the thumb and pinkie. This feature can also be expanded to text using one hand only. 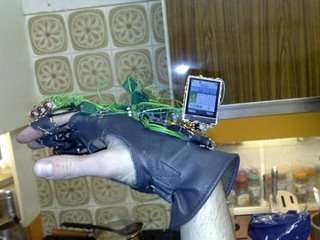 The number keys (0 to 9), plus the call and end call keys were soldered, as the wires were routed to the fingers. Each finger has 3 push buttons positioned on it, making them operable via the user’s thumb. In case you’re wondering, the speaker and the mic were placed at the base of the thumb and tip of the pinkie.

The other phone parts (phone board and battery) were mounted on the back side of the glove, while the screen was attached with copper wire and it can be moved around, as the user pleases. In order to create this contraption, its inventor spent 50 GBP on materials, which is quite reasonable, for the coolness he achieved in the end.