Antitrust laws are ready to strike great companies once more, as Google’s chief executive, Eric Schmidt is being investigated by the Federal Trade Commission for being part of Apple’s leader board. The companies are competing in at least one market segment (handsets), so this might be considered a breach of antitrust laws. 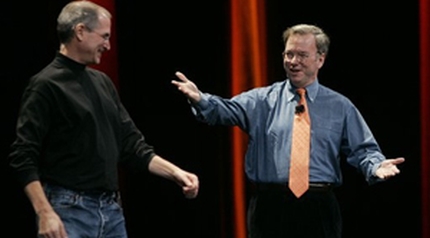 In spite of the investigation, Mr. Schmidt refuses to quit his position, openly sharing his love for Apple with the whole world. Meanwhile, Apple’s mastermind, Steve Jobs has also stated that he appreciates Eric Schmidt’s work both as Google CEO and member of the Apple board of directors.

As part of the company that created the iPod and MacBook, Mr. Schmidt has been in charge with designating board policies and objectives and approving budgets. He also states that there’s no competitiveness issue here, since Apple and Google aren’t in direct competition, at least from his point of view.

However, not everyone’s pleased with Mr. Schmidt’s love for Apple, as Brandon Rees, representative of a group of major shareholders says that he doesn’t want Google to become an “antitrust devil, like Microsoft”.