After launching the Nexus One smartphone, Google realised that it would be a pity to let all that potential go to waste and put the 1GHz processor and 3D graphics to good use, by launching Google Earth for Android. This is the fastest version of the software, with smooth framerate and 800 x 480 resolution supported. 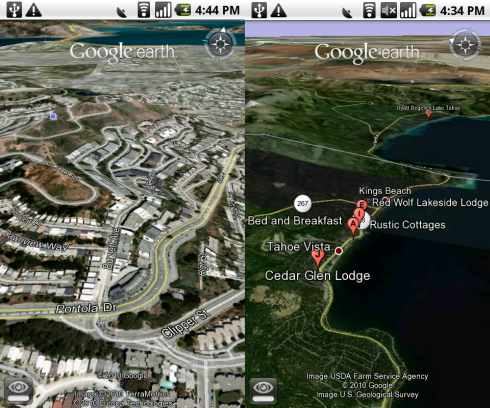 Together with this release, Google launched the Roads layer, already available in the desktop version of Google Earth. This option allows users to see the roads they’re driving on, placed on top of satellite imagery, for better orientation. Voice recognition is also used in Google Earth for Android, through a feature that looks like a pocket globe, responding to the user’s commands.

For example, saying “Eiffel Tower” or “a hotel in the San Francisco area” will take you to the desired results, thanks to the technology of Google Search by Voice and Google Local Search. Just like the other Google Earth versions, this software allows you to browse photos, places and businesses, while clicking icons for more info.

The software is available in the Android Market and supported on most Android 2.1 devices.