While overwhelmed with the coolness of the new Google mascot, the cute Gingerbread man shown below, we’ve learned that this release may actually not be Android 3.0. Although we had confirmed this info a while back, now Android 2.5 or 2.3 have popped up as possible follow-ups to Froyo. 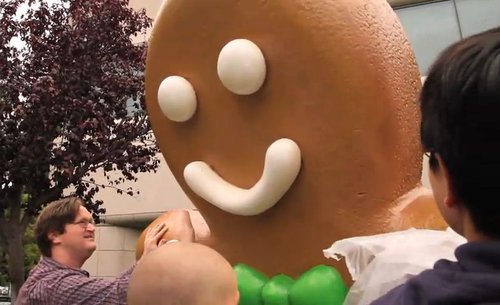 The proof for this is the following snippet taken from Google’s issues repository, used to fix bugs or report features. In this snippet, someone from Google mentioned that the next major release will be Android 2.3. Back to the mascot, as you can see in the vid below, it was placed next to the giant frozen yogurt that defined Froyo. Here’s the snippet showing Android 2.3 being mentioned:

Many Android users are still waiting for their Android 2.2 updates, while tablet makers have kept their products on hold, till Gingerbread was released. There could be one other way to get both new versions: update-only Android 2.3 and Android 3.0 on fresh devices only. What do you say?