In case you’re travelling to a foreign country, you can use Google Goggles to translate everything you see, simply by pointing your phone at a word or phrase. There’s a region of interest button included in the software, used to draw a box around specific words. 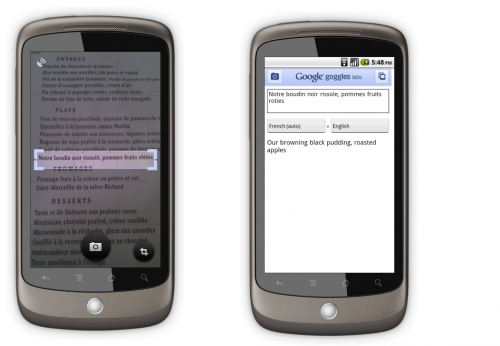 After you press the shutter button, Goggles will recognize the text and give you the option to translate. Pressing the translate button will allow you to select the source and destination languages. The prototype of this technology was first shown in action at the Mobile World Congress 2010 in Barcelona and recognized only German text.

Now Goggles support many languages, like English, Italian, French, Spanish and German. Google is working on support for Latin languages and non-Latin ones as well. Goggles v1.1 comes with improved barcode recognition, recognition of products and logos, an enhanced UI and support for visual searches based on images in the phone’s photo gallery.