A couple of days ago we unboxed the LG Nexus 4, aka the Google Nexus 4, only to be surprised by the fact it lacks headphones. That’s right, the handset doesn’t come bundled with earbuds and I frankly admit I haven’t seen any review to complain about that. Anyway, you should know that this model costs $300 in the 8 GB version or $349 in the 16 GB one and you can buy it straight from Google. 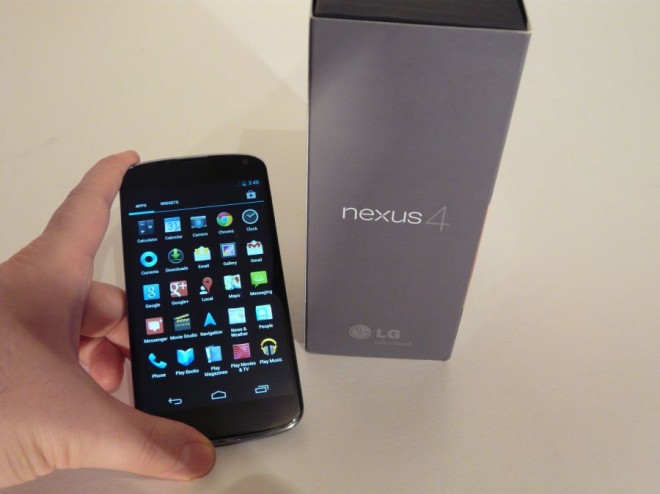 We’re dealing with a smartphone launched in November, the very first to run Android 4.2 Jelly Bean and a device that packs a micro SIM card slot, no microSD and no 4G. It measures 9.1 mm in thickness and weighs 139 grams, being  slightly beefier than what I imagined. Inside the box we find the handset, its manual, USB cable and charger, plus the small metal key to pull out the microSIM card slot. Google Nexus 4 uses a 4.7 inch 768 x 1280 pixel display, with Gorilla Glass 2 protection, 8/16 GB of storage and 2 GB of RAM.

There’s also HSDPA connectivity with speeds of 42 Mbps, plus dual band WiFi, DLNA, Bluetooth 4.0, NFC and an 8 megapixel camera with autofocus, LED flash and Photo Sphere. Inside the handset there’s a quad core Qualcomm Snapdragon 1.5 GHz CPU and the Adreno 320 GPU. Finally, the battery inside is a non removable Li-Polimer unit with a 2100 mAh capacity and the device has a glass back that we’ll probably scratch by mistake at some point.