HTC One is already a hit with million of units under its belt and now it’s time for a new hotshot to take over. While the HTC One Max/T6 remains a mystery, the Butterfly 2 was already rumored for a while now and it appears it will be launched on June 19th. 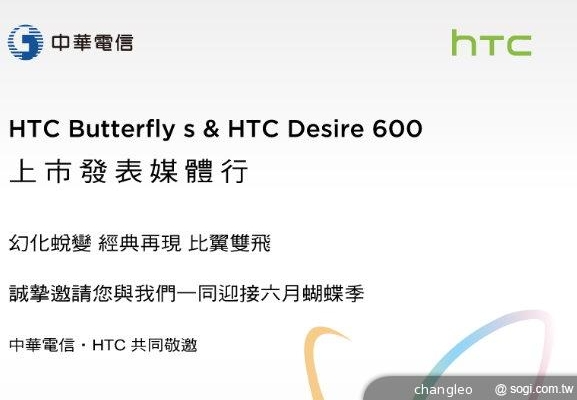 The information comes from Taiwanese site Sogi, who reports that the handset will be called HTC Butterfly S and its name appears on an invitation to an event taking place next week, on the 19th. Butterfly S comes with an Ultrapixel camera at the back, LTE connectivity, a new CPU (Snapdragon 800 maybe?) and a larger battery. The OS is still Jelly Bean, but possibly with a hint of Sense 5.1 this time.

We also expect a 5 inch Full HD display here, probably of this Super LCD 3 kind. Also on June 19th, HTC will debut the Desire 600 handset on the Taiwanese market. This model was already rumored to arrive to Europe in the firs half of June, so it’s in the proper time frame. Desire 600 is a dual SIM smartphone with Android Jelly Bean on board, a 4.5 inch qHD display, a quad core 1.2 GHz CPU and Beats Audio.