HTC EVO 3D was shown last week at CTIA 2011 and now it’s ready to take over Europe, thanks to its 3D graphics and dual core processor. This HTC EVO 4G follow-up is a pretty ambitious device, with WiMAX support, 3D graphics and 3D capture support. It rivals the LG Optimus 3D, that has about the same features. 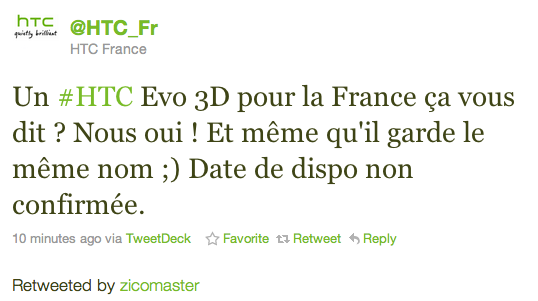 If you’re interested in details, HTC EVO 3D comes with a 1.2GHz dual core Snapdragon CPU, a 4.3 inch qHD display and 4GB of internal memory, plus 1GB of RAM. The dual cameras at the back are both 5 megapixel units, capable of 3D 720p video capture and 2D 1080p capture, Double LED flash is also included.

The OS of choice is Android 2.3 Gingerbread and the handset comes with WiFi 802.11 b/g/n, Stereo FM radio and GPS. A new version of HTC Sense adorns the beautiful screen. The tweet above belongs to HTC France, promising us the goodies, the HTC EVO 3D, keeping its US name and specs.