Well, the HTC EVO 3D dual core smartphone and EVO View 4G tablet are pretty much official, since they were spotted on Sprint’s website recently. They should be introduced today during CTIA. The EVO 3D is particularly interesting, as the successor for HTC EVO 4G, one that sports a dual core CPU and 3D capability. 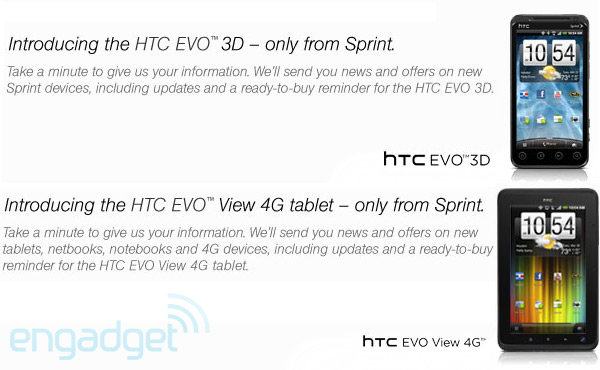 HTC EVO 3D supports 1080p playback and 720p 3D graphics, plus it comes with a 1.2GHz dual core processor, while the HTC EVO View 4G tablet, another newcomer today (or maybe the rebranded HTC Flyer) uses a single core 1.5GHz CPU. Both devices run Android with the HTC Sense UI and we’re sure hoping for a surprise from the tablet, making it run Honeycomb, although Gingerbread is most likely installed on it.

What’s interesting to notice is that the EVO View uses a black case, instead of the silver one of the HTC Flyer and who knows what other customization is to be expected.