CTIA 2011 starts today, with tons of devices taking over the floor of the Orlando-based event. Among the new products there’s also the HTC EVO 3D smartphone, supposed to be HTC’s first dual core device and also its first 3D-enabled handset. Fortunately, the specs of the phone have leaked prior to the CTIA announcement. 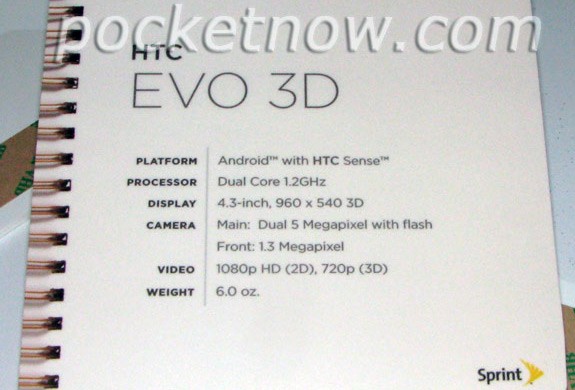 We’re dealing with a successor to the EVO 4G, one that packs a 1.2GHz dual core processor and a 4.3 inch qHD display with a 960 x 540 pixel resolution. At the back you’ll find dual 5 megapixel cameras and the specs also mention 1080p video playback. As far as 3D is concerned, you get 720p tridimensional playback.

Android 2.3 with HTC Sense is the platform of choice for the handset, that will be accompanied at the Sprint booth by the EVO View tablet, it seems. More info later today!