We’ve heard about HTC G2 before, as part of the trio of new devices that the Taiwanese maker is preparing for this year. We’ve got the high end M7, the midrange M4 and the G2, that’s the lower end of the newcomers. It’s expected to either come during the HTC event on February 19th or at MWC 2013. 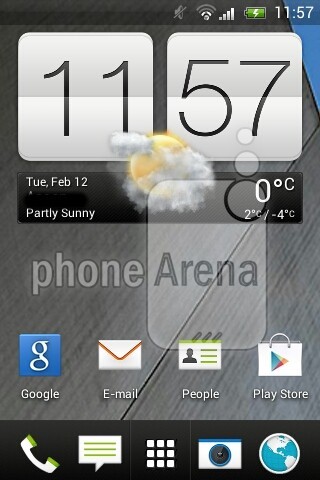 Today we’ve come across a leak showing the homescreen of the G2 and a glimpse at the HTC Sense 5.0 UI applied on a lower end handset. The minimalistic interface is here, with the widget styling we’ve also spotted on the leaked HTC M7 pics. The dock area has the new HTC icons and the overall look is very simple and clean. As far as the HTC G2 goes, this lower end handset is expected to feature a 1 GHz processor, a 3.5 inch display and a 320 x 480 pixel resolution.

We also expect a 5 MP camera, Android 4.0 ICS as the OS, 512 MB of RAM and 4 GB of storage. When reading up these specs, I felt that this model may end up being some sort of follow-up to the HTC Desire C. Hopefully, the price will also be affordable.