So, is T-Mobile’s network that poor and fluctuating or does the HTC HD7 suffer from the iPhone 4’s “Death Grip”? Antennagate is about to ignite once again and this is the first time Windows Phone 7 has something to do with it. Strangely enough, the signal bars may come back when you grip the phone, after a while… Here’s a vid of this bug.

We’re tempted to believe that this is nothing like the death grip, but rather a poor reception overall from the phone, no matter how you hold it, which is even worse than the iPhone 4 bug. It’s common knowledge that T-Mobile’s coverage is worse than AT&T, but is it that bad?

This is not the first time the HTC HD7 has been believed to suffer from bugs and it appears the strange layer of color that appeared on HTC HD2 photos is back, this time bugging the HD7’s camera… Meanwhile, no other similar issues have been spotted on other WP7 phones, at least as far as the signal is concerned. 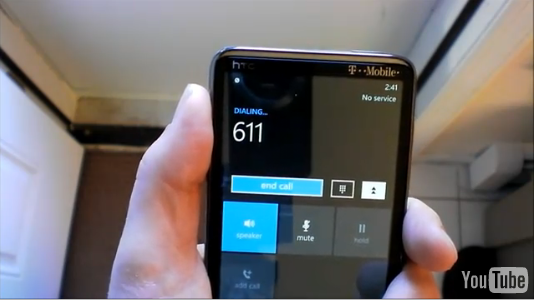