We’ve recently found out that HTC Hero and Samsung Moment will be getting Android 2.0 updates, but now Sprint just tweeted the fact that these two handsets will be upgraded straight to version 2.1. This will happen in the first half of 2010. 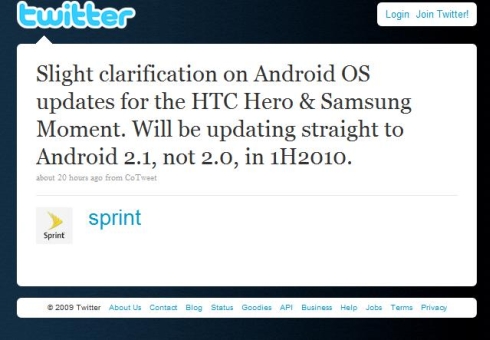 Gearlog claims that Sprint was probably going to do this all along, but they didn’t announce their intention until the Nexus One was leaked, complete with Android 2.1. This OS was taken apart recently by many developers and hackers, messing with its code and porting the ROM on many devices.

HTC Hero is probably one of the most famous handsets of 2009 and in case Samsung Moment doesn’t ring a bell, know that this is side-slider CDMA dual band phone, packing a full QWERTY keyboard, WiFi, GPS and full HTML browser. The handset features a Li-ion 1440 mAh battery, a 3.2 inch touchscreen display and a 3.2 megapixel camera.