HTC Hero was certainly a great product, actually so great that many of you will be excited to know that a revamps has been planned under the name Hero S. This new handset fills in the blanks and continues the series that includes the Desire S, Wildfire S and Incredible S. Kind of makes sense, right? 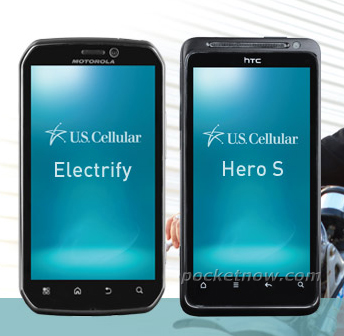 HTC Hero S will initially debut in the US via US Cellular, as deduce by the association with Motorola Electrify in the picture below, another model that will be sold by US Cellular soon. Rumor has it that the GSM version of the device will be called HTC Kingdom, a handset we’ve been hearing so much about, especially thanks to leaks and pics.

Speculations say we should expect a 4 inch touchscreen with qHD resolution and single core 1.2GHz CPU on the HTC Hero S. 768MB of RAM, a 5MP main camera and front VGA cam fill in the rest of the specs. WiFi and Bluetooth, as well as 3G are pretty much a given. Now let’s see a lunch event, a price and a solid launch date.