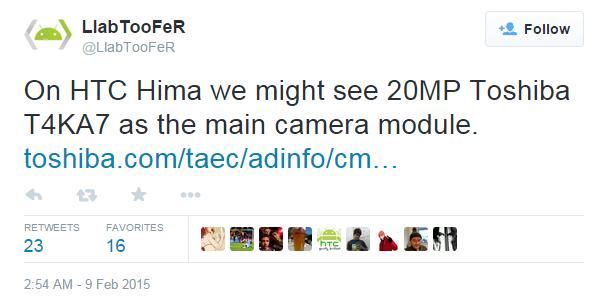 Usually we see @evleaks or @upleaks posting solid rumors about yet unlaunched smartphones, but today a ROM developer takes their place. It’s famous LlabTooFeR, that has some interesting claims to make about HTC One M9’s camera.

Apparently, the device codenamed HTC Hima will adopt a 20 megapixel Toshiba T4KA7 unit as the main camera module. For a while we thought the new flagship was going to use a Sony IMX sensor, but no longer. Some speculate that HTC could use multi sourcing for the sensor, like it happened with the HTC One M7. Frankly speaking, I haven’t heard of major OEMs using Toshiba cameras, since they’re all about Sony nowadays.

Having a glance at the official specifications of the Toshiba T4KA7 module, this one is a 20 MP unit with 1.12 micron pixels, BSI and CMOS. It measures 1/2.4 inches and features auto defect pixel correction. Low power usage and HDR are also among its features and 150 FPS 720p capture is also mentioned, as well as RAW capture. Seeing how HTC pushed the pixel size boundaries two years ago, will they go back to the smaller pixels?