Only yesterday did we get a chance to read what HTC has to say about their upcoming flagship device said to be uncovered this month on the 19th. Today the manufacturer has again released a banner giving us a glimpse at things to come. Fortunately it’s not long now. 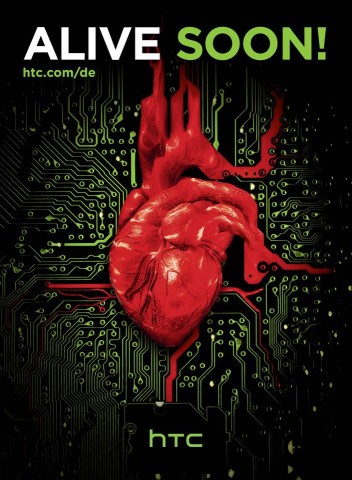 HTC has launched another teaser to point at their upcoming flagship device that has been rumored so much lately. This time the image reveals a hart and the title is “Alive Soon!” with reference to their newest device, named the HTC M7. Courtesy of the internet we already know a lot about what to expect when HTC finally decides to reveal the handset. Among the features it will include is a ultrapixels camera to rival with the technology that Nokia has integrated into their flagship PureView 808.

The HTC M7 will be tough to compete against no matter what angle you choose to look at it. It has a tough casing and we expect a design worthy of the HTC brand. Next there is the hardware configuration, staring a quad-core Snapdragon S4 Pro chip and 2 GB of RAM. The next decisive feature is the 4.7-inch, 1080p Full HD display that will offer over 400 ppi. Finally we have Beats Audio and hardware amplifiers for great quality sound. Coupled with the great camera, it’s no wonder that everybody is talking about this smartphone.