HTC’s newest upcoming unit, the M7 has been leaked a lot lately to reveal some of its specs and software features, including details about availability. The device is expected to be unveiled next month at MWC and it will be the manufacturer’s newest flagship smartphone. 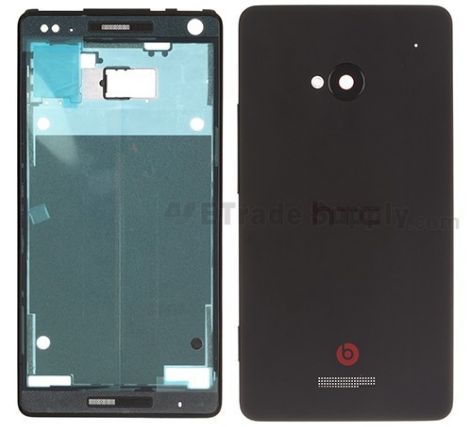 HTC’s newest device is rumored to be made on the same platform as the Droid DNA for Verizon and having about the same hardware features. The device will be supporting a big screen of 1080p resolution and a great rear camera. The latest leaks confirm the recent rumors as the device’s front and back plates reveal a display size of about 4.7-inches and a dedicated camera shutter button. The components are made of aluminium and a a tiny hole on the back reveals a second noise-cancelling microphone.

HTC M7 will of course support Beats Audio technology and the same features as the WP8 8X, including dedicated amp for speaker and microphone. The device carries the Beats logo on the back of the square corners shaped housing. We suspect it will be powered by the same Snapdragon S4 Pro quad-core chipset that has been going around allot lately. The camera is supposedly 13 MP and featuring HTC’s ImageChip. Further details to come as MWC is a few weeks away.