HTC One, formerly known as the M7 is launching in just 2 hours and it has already leaked in a hands on video, courtesy of Mobile Geeks. The video was taken down from YouTube a bunch of times and reproduced on other accounts, but now we have it on Vimeo. We’ve already seen a leaked official looking render of the device and the video confirms its interesting lines around the camera area. 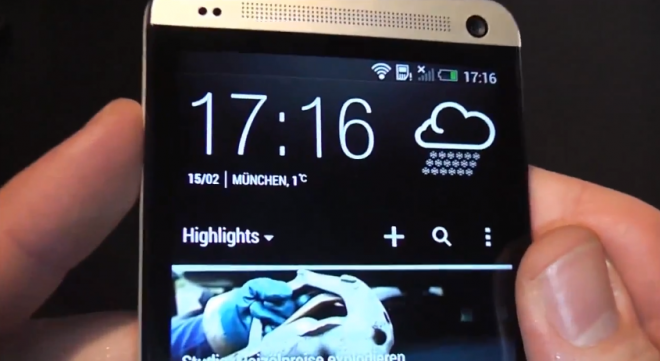 The features of the HTC One are already known, but still I find myself surprised by how pretty and thin the handset really is. The interface, HTC Sense 5.0 also looks pretty hot and the 1080p crisp 4.7 inch display is impressive, with a very clear and crisp image. Each and every rumor has turned into reality and on the screen we also spotted a sort of social networking feed, some sort of Flipboard or maybe a new FriendStream version. Sadly, the brightness of the display was not set all the way up.

What’s really interesting is that below the screen there are 2 capacitive buttons instead of 3 and the third could actually be the HTC logo. The physical volume buttons look metallic and seem very elegant, plus there’s a slight curve in the shape of the handset, as well as a metallic looking back. The camera lens is big and good looking. We’ll be back with more info once the device launches.