After the HTC One X for AT&T got an official pricing and launch date, it’s time for the One S to start its descent onto USA, but this time through T-Mobile. The thinnest HTC ever will come to the carrier on April 25th, with a price tag of $199.99, after a $50 mail in rebate and with a 2 year contract. 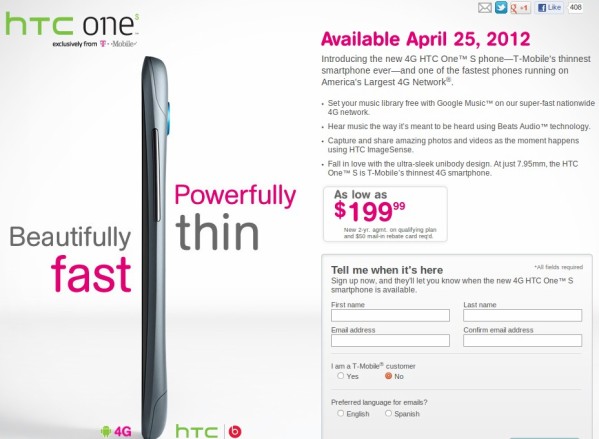 The device will come with support for T-Mobile’s 42 Mbps HSPA+ network, so while it may not be the LTE provided by the HTC One XL on AT&T, it’s still pretty fast. As far as design goes, there’s no change from the international version, unless you count the T-Mobile logo on the front. For those of you who don’t know, HTC One S is part of a trio of handsets unveiled by HTC at MWC 2012, the HTC One series. This model comes with a 7.8mm chassis, weighs 119.5 grams and packs a Super AMOLED 4.3 inch display.

HTC One S provides 16GB of storage, 1 GB of RAM, an 8 megapixel camera with the new ImageSense technology, support for 1080p 30 fps video capture and simultaneous HD video and image recording. The OS on board is Android 4.0 ICS, that runs on top of a Qualcomm MSM8260A Snapdragon dual core processor.