Announced this week, HTC One X+ is now up for preorder in UK via Clove Technology. The device is available for $763 including VAT and it’s the unbranded and unlocked version we’re talking about here, without carrier commitment. In case you didn’t know, the handset brings an improved battery and CPU compared to the original HTC One X. 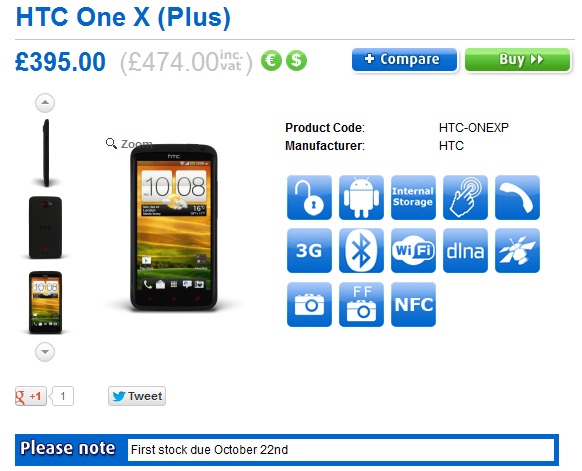 One X+ also features the new HTC Sense 4+ user interface on top of Android 4.1 Jelly Bean. To that we add 64 GB of internal memory and an extra 25 GB of storage in the cloud via Dropbox for 2 years. The product ships on October 22nd. Across the pond, the new HTC smartphone is expected on AT&T, with 4G LTE connectivity and keeping the same 4.7 inch HD display of the predecessor, a Super LCD 2 screen with Gorilla Glass protection. Also kept is the 8 megapixel back camera with ImageSense technology, fast shutter and simultaneous photo and video capture.

Upfront we’ve got a 1.6 megapixel camera and you should know that the battery stays non removable and the SIM slot is a micro SIM, unless HTC decides to go the Apple way with nano SIM. So, will you choose this model over the Galaxy S III, or maybe prefer the LG Optimus G?