The guys of Mobilissimo.ro are at it again, comparing the hottest handset right, HTC One X with none other than… itself. Let me clear this for you: they actually compared the Tegra 3 HTC One X with the LTE-packing HTC One XL, the US version of the One X model. Also, if you’re interested we’ve got a nice comparison between the HTC One X, One S and Samsung Galaxy S II. 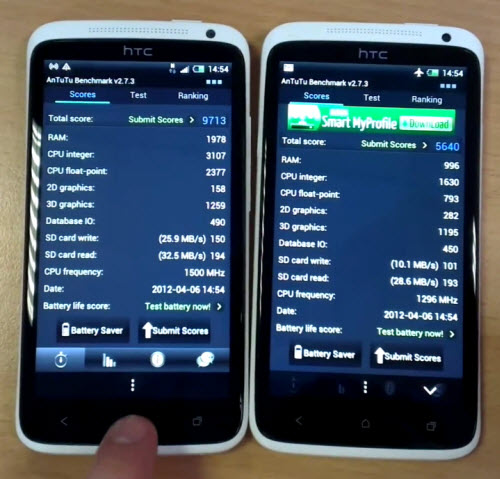 AT&T is the carrier selling HTC One XL and you get to see it benchmarked in the video below. The difference between the two is huge: 9.713 versus 5.640 and the first one is the HTC One X, while the second is the HTC One XL. This is the AnTuTu benchmark I’m talking about and the HTC One XL actually uses a 1.5 GHz Krait dual core Snapdragon S4 processor instead of the Tegra 3 on the One X. The reason for the CPU replacement? Tegra 3 doesn’t handle well LTE connectivity, apparently.

It’s interesting to see this considering that in some other benchmarks like the Snapdragon S4 was proven to be the more powerful CPU, at least in Quadrant. Snapdragon S4 is a very popular choice, since it’s also present on the hot ASUS PadFone, the smartphone + tablet combo unveiled at MWC 2012.