The guys of Mobilissimo.ro managed to compare the most talked about handsets in a series of benchmark tests. I’m talking about the HTC One X and One S, that were put to the test against last year’s most popular Android phone: Samsung Galaxy S II. What came out of this comparison you can find out below. 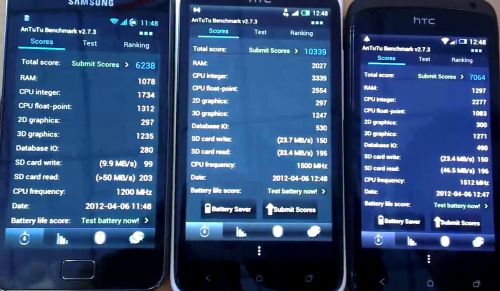 This is a synchronized AnTuTu benchmark session, with HTC One X getting 10.339 points, while HTC One S scored 7.064 and Samsung Galaxy S II 6.238. There’s also a video below, showing the benchmarking of the 3 devices. As you may know already, HTC One X comes with a quad core Tegra 3 1.5 GHz processor and a ULP GeForce GPU, while the HTC One S uses a dual core Snapdragon S4 1.5GHz Krait processor and Adreno 225 GPU. Meanwhile, the Galaxy S II is all about that dual core Exynos 1.2 GHz processor with Mali 400 MP GPU.

Right now HTC One S and One X seem like the most impressive devices on the market and I’m very curios what the US HTC One X with Snapdragon S4 would score in such a test. One thing I must mention is that if you tried to benchmark your own Samsung Galaxy S II and it didn’t get the same points, it’s because the one here runs the Android 4.0 ICS ROM Omega.