Remember the handset that was teased at the first real 4G phone from HTC? Rumored to be the Incredible HD, the smartphone turns out to be the Thunderbolt model, as shown by the URL “http://www.htc.com/4G?extcid=Thunderbolt-4G-Disp” included in the advertisement on androidcentral.com. 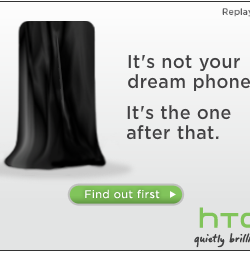 They made this discovery, as the ad was placed on the site. Also known as the Thunderbolt 4G, the handset will be announced by Verizon on January 6 during CES 2011. In case you consider that the T-Mobile G2 aka HTC Desire was the first 4G phone, guess again, since it was a 3.5G handset. Also, the HTC EVO 4G was a WiMAX unit, so it’s still far from real 4G.