Pocketnow decided that HTC Touch Diamond2 was too good a handset to just be reviewed and praised, so they had to compare it to the famous Touch HD. Diamond2 stands its ground quite well and faces the challenge, as you’ll see for yourself in the following comparison video:

The showdown rather relies on hardware, than on software, since both devices use Windows Mobile and Touch FLO 3D, although Diamond comes with an upgraded UI. Both smartphones are available in Europe, with no contract and Touch HD goes for $650, while Touch Diamond2 is cheaper, at only $550. Since we’re in the similarities section, both devices support the same screen resolution (800 x 480 pixels), both pack 528 MHz Qualcomm processors, 512 MB ROM, 288 MB RAM, Bluetooth 2.0, WiFi and whatnot.

The difference is made by the screen, which has a 3.8 inch diagonal in the case of Touch HD, while Diamond2 comes with a 3.2 inch display, but also with a higher pixel density. Diamond’s successor is a milimeter thicker than Touch HD, that’s far bigger than its opponent, due to its width, which makes it rather a PDA than a phone. 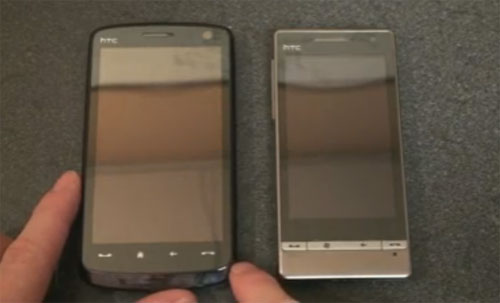 Also, we learn that Diamond2’s physical keys are easier to press, than the ones on Touch HD, but the latter has the advantage of a magnetic stylus. Both handsets use 5 megapixel cameras without flash, but with autofocus and the devices sport a similar port layout, but we notice that Touch HD’s speaker is placed at the back, while Diamond2 has is speaker on the side.

Last, we find out that the new Diamond uses a 1100 mAh battery, that lasts longer than the 1350 mAh one on its rival, but once again HTC Touch HD retaliates by incorporating a 3.5mm audio jack, lacking from Diamond 2. The verdict? Pocketnow says that Touch Diamond2 is the better smartphone, specially thanks to the lower price, the handset’s feeling, the battery life and the fact that it’ll allow its user to upgrade the current OS to Windows Mobile 6.5 for free this year.