Huawei Ascend P1 was tested by us at the end of the summer and after the video review comes the text review right here. This model was shown at MWC 2012 and took a long series of months till it reached the shops, making it obsolete when it came out. The product costs about 450 euros or so and it’s available in black and white. The price is kind of high for a dual core model… 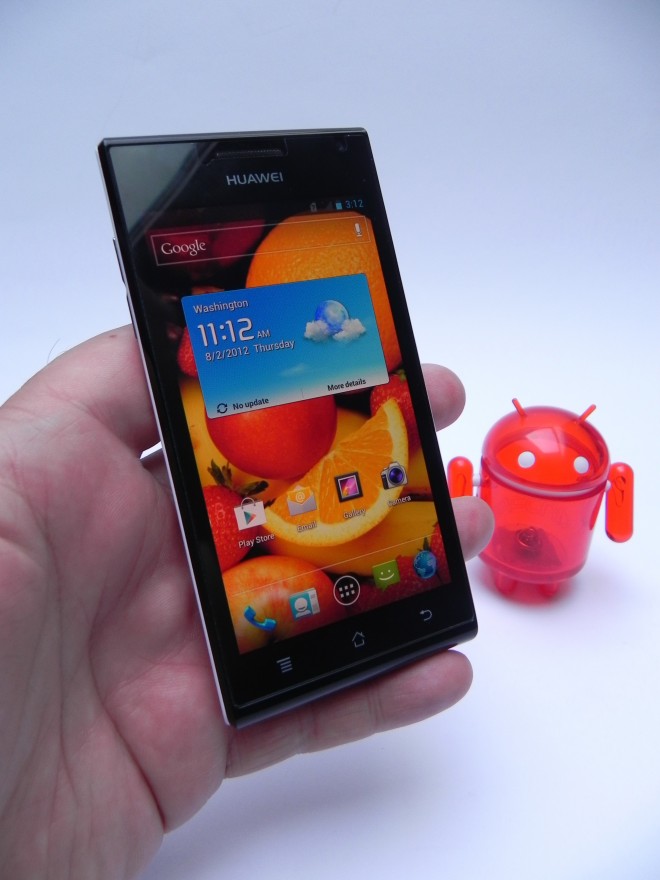 As far as design goes, the handset is pretty pleasant to touch and look at. It measures 7.7 mm in thickness, making it one of the thinnest smartphones out there. It weighs 110 grams, so its measurements are pretty close to the ones of the iPhone 5. The handset looks very cute and elegant and has the slots externally oriented, rather than under the hood. It looks a bit like the Galaxy S II, only with even more plastic embedded in the case. It still feels like a solid piece of machine.

We’ve got 3 capacitive buttons below the display and if you hold the Home one, you’ll trigger the multitasking. The problem with these buttons is that they’re not always as responsive as we’d like them to be. At the back we have a non removable 1670 mAh battery, that provides a day of moderate use. As far as hardware goes, we’ve got a TI OMAP 4460 CPU inside, a dual core 1.5 GHz Cortex A9 unit, with a Power VR SGX 540 GPU, so basically it’s the same setup as the one of the Galaxy Nexus. 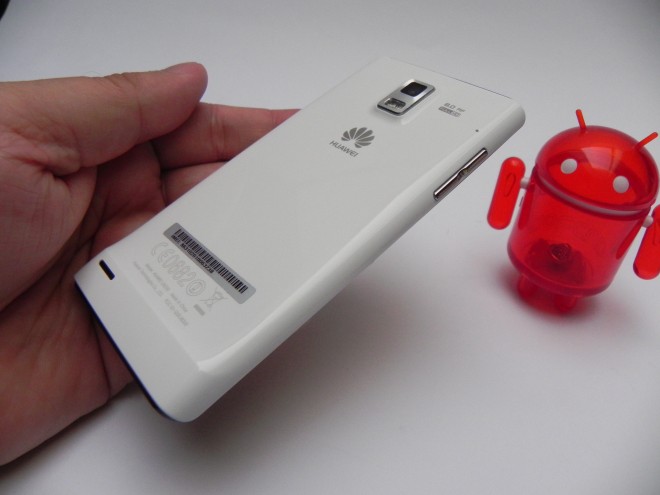 The screen is a Super AMOLED 4.3 inch one, with a 540 x 960 pixel resolution and Gorilla Glass protection. We’ve also got Dolby Mobile 3.0 Plus technology on board, 1 GB of RAM, 4 GB of ROM and HSDPA connectivity. Other features include WiFi, DLNA, Bluetooth 3.0. As far as the camera is concerned, this is an 8 megapixel unit with autofocus, dual LED, HDR, geotagging, panorama and 1080p 30 fps video capture. There’s also a 1.3 megapixel front camera on board, plus an accelerometer, compass, gyroscope and GPS.

The OS is Android 4.0 ICS, with a custom UI an widgets, as well as a nifty 3D theme. In the benchmarks we’ve got the same scores, or around the same scores as the Galaxy S II and a bit past the Galaxy Nexus. Huawei Ascend P1 beats the Galaxy Nexus in Quadrant with 3521 points versus 2200, in AnTuTu with 6200 versus 5000 and Vellamo with 1379 versus 840. The screen is pretty OK, as shown in the video review, with decent viewing angles, while the audio experience is also pretty good, in spite of the vibrating back caused by the speaker.

I also like the fast boot on the device and the nice 3D interface, that many people will find appealing. Overall this is a 7.33 out of 10 phone for us and mode details can be found in the review below.