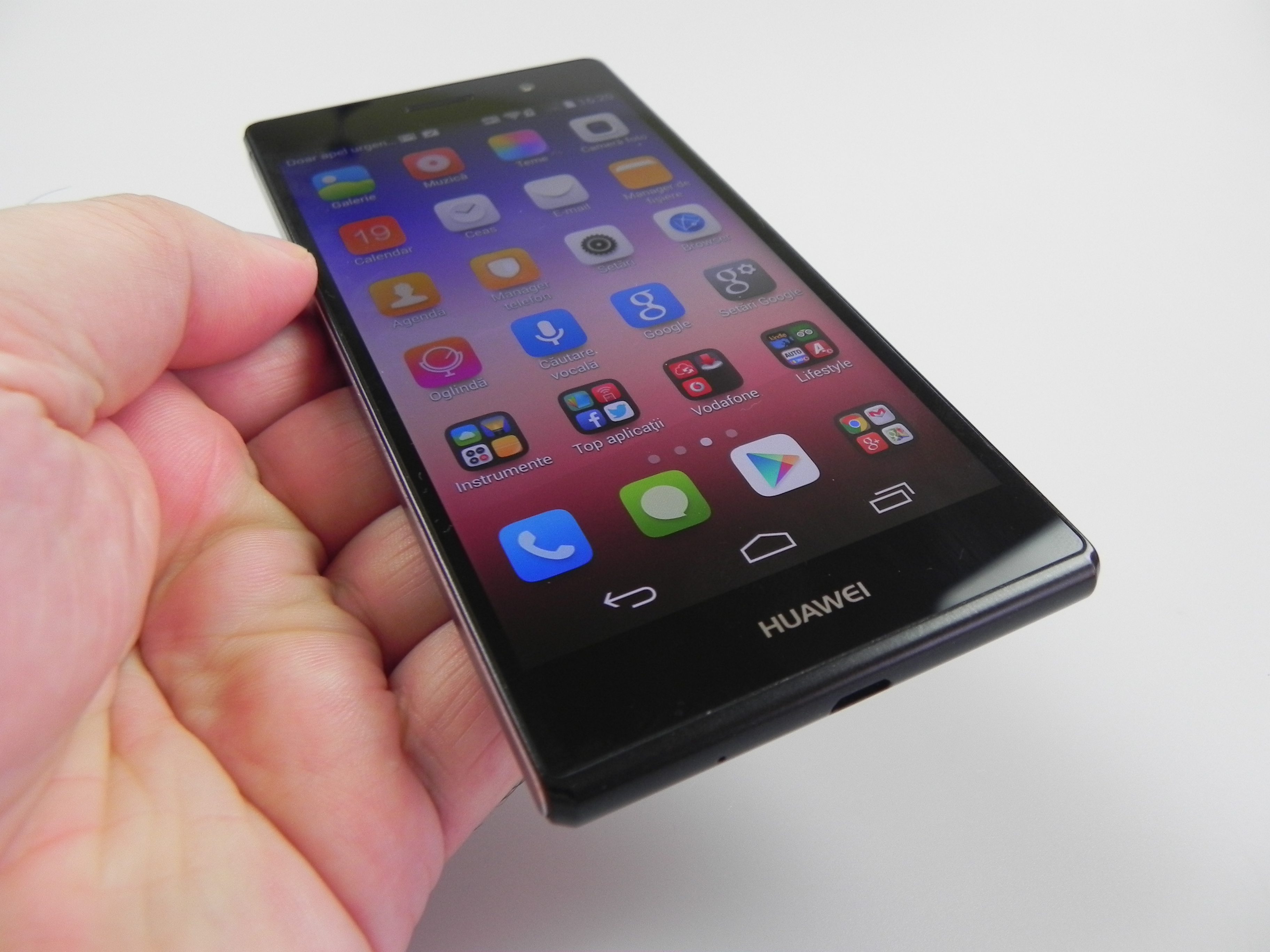 Huawei Ascend P7 is one of the most chic midrange phones out there, one that was announced in May and launched in June. It’s priced at $414 on Amazon and it comes with an iPhone-like allure and I do mean the older iPhones with a glassy back. It also feels a bit like an Xperia and a Nexus 4. 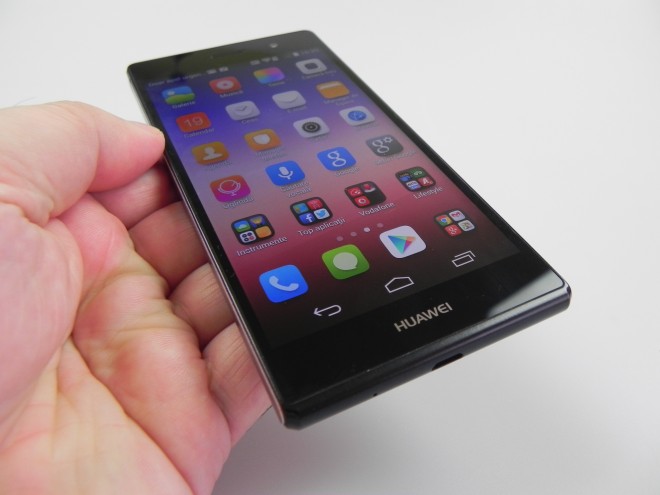 We’ve got glass at the front and back and there’s plastic below the glass at the back. This model measures 6.5 mm in thickness, weighs 124 grams and has aluminum sides to keep it solid. The P7 uses a rectangular format, it has a rounded bottom and it’s a fingerprint magnet, but less than the Sony Xperias. It’s comfy and not slippery and it has a solid build. It adopts a small bezel, but it’s a beautiful device.

The handset relies on an unibody design and it’s not easy to use with one hand, because it’s tall. Upfront we’ve got the earpiece, front camera, sensors and the notification LED, while at the back there’s the main camera, flash and speaker, plus at the top there’s the audio jack and microphone. We’ve got a microphone and microUSB port at the bottom, nothing on the left side and metal buttons on the right side (volume buttons and On/Off buttons). On the same side there’s also the microSD and microSIM card slot, both of them opened up using the same metal key. 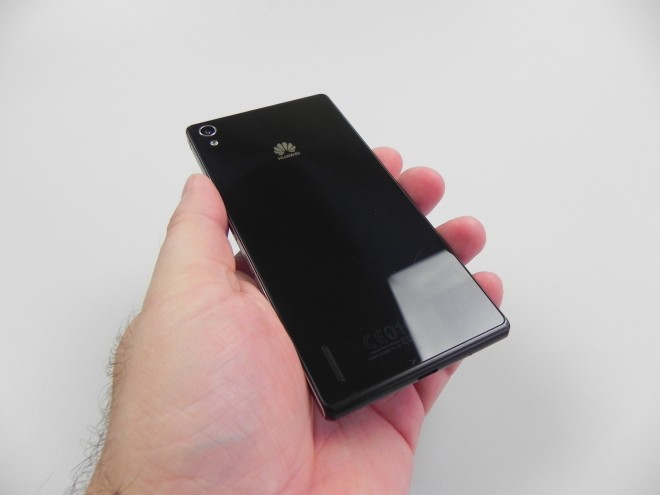 Overall, the design is nice particularly for a midrange phone. As far as hardware is concerned, the Huawei Ascend P7 comes with a quad core Hisilicon Kirin 910T, clocked at 1.8 GHz, a Cortex A9, with a Mali 450 MP4 GPU. There’s an IPS LCD 5 inch screen on board, a Full HD one with Gorilla Glass 3 protection. The same protection is applied to the back side. Huawei Ascend P7 features 16 GB of storage, a microSD card slot with support for up to 64 GB of storage, 2 GB of RAM, Dolby Digital Plus technology, a 13 megapixel back shooter with LED flash and a front 8 MP camera for selfies.

There’s HSDPA connectivity, with 42 Mbps download speed, LTE, WiFi dual band, WiFi Direct, DLNA, Bluetooth 4.0, NFC, microUSB 2.0 OTG, FM radio, GPS and Glonass. There’s also an accelerometer, proximity sensor and a compass. The battery included here is a 2500 mAh unit, that on paper offers 22 hours of talk time, or 422 hours of standby. In our test, that involves looping a HD video with WiFi on and brightness at 50% we achieved 4 hours and 57 minutes, which is OK only when compared to the Nexus 5, that also achieves around 4 or 5 hours, like the HTC One M7. 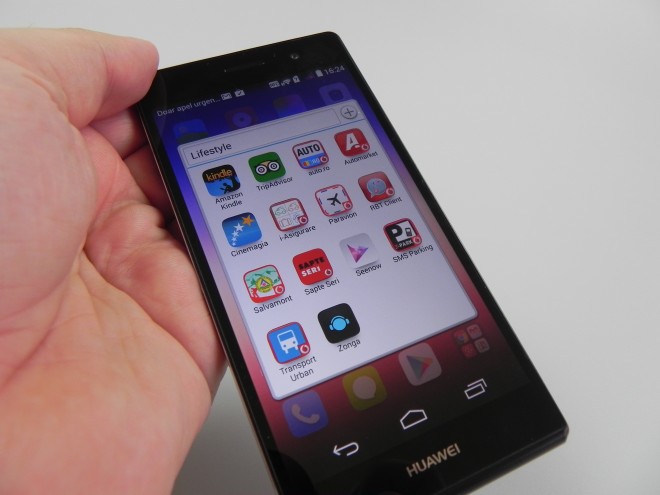 Since this model is slim, I must say I expected this battery sacrifice. The charging is long and takes 3 hours and 10 minutes. The battery is not very impressive and we’ve got Power Saving options in the Settings area. There’s Power Monitoring, that finds the apps that are eating battery secretly or with the screen off. You can optimize brightness, screen timeout, GPS, mobile connection and vibration to save juice.

There’s also a Power Plan area, with modes like optimum performance, that includes slight tweaks for gaming, a Smart mode, that’s balanced and an Ultra mode, that only lets calls and texts happen and offers a black and white UI. It also pretty much triples the battery life of the device. You can allow or not allow apps to work in the background. As far as acoustics go, we’ve got a clean player UI and the device is loud, offers crisp sound, a good bass and it offers good high notes. With DTS on, the sound is more natural and we’ve got player settings here for Sleep Mode and the option to organize songs by mood. 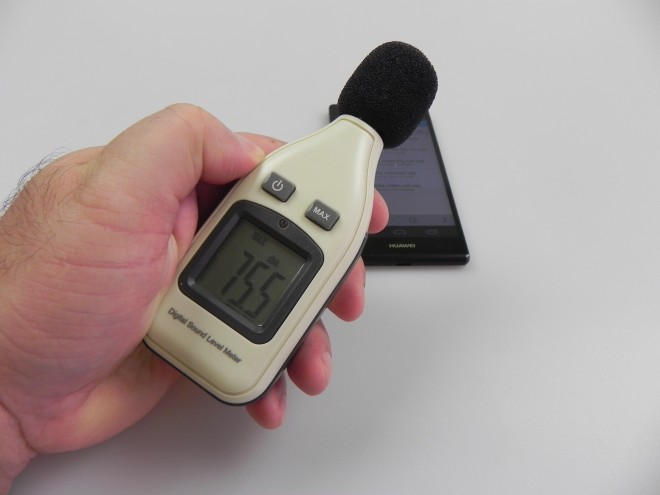 There’s no EQ, which I regret. The headphones bundled with this model are rigid, uncomfortable and there’s a small remote included, with one button in the mix. The headphones are loud and clear, but honestly they could be louder. The FM radio is present here and takes quite long to search stations and such. We also did a decibelmeter test on this device, that came back with 76.1 decibels at the back or 75.5 dBA at the front, which is theoretically weak, but in real life the sound is OK.

As far as the display goes, this one is a 5 inch Full HD unit, an IPS LCD with 455 ppi density and in cell LCD technology from Japan Display. There’s 3 mm bezels here and I have to say this panel is not very good in sunlight. The display is oversaturated, has wide view angles, it’s bright and you can use it with gloves. The pixels are of the RGB stripe kind and the LUX level here is 376, which is only OK, not very good, but considering the Xperia Z2 gets only 366 LUX, so we’re doing fine. 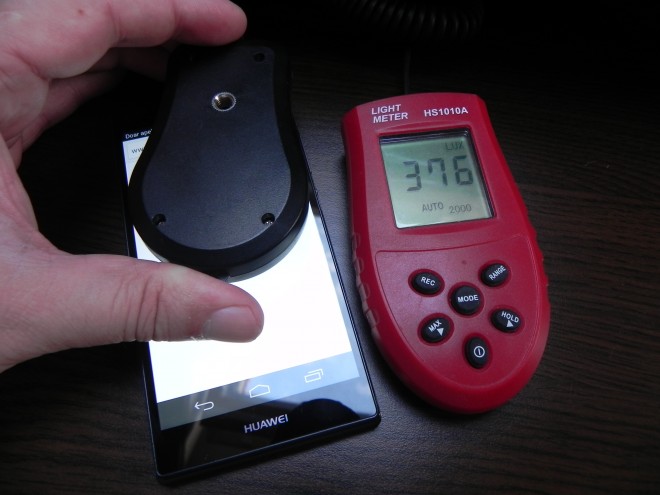 In the settings area you can set up the color temperature  to warmer or colder, using a slider and there’s also an option for sunlight readability, font size, gloves mode and overall I’d say this is a good display. Now let’s move on to the camera. Huawei Ascend P7 has a 13 megapixel main camera, with LED flash, a Sony sensor with BSI and F/2.0 aperture. There’s an 8 M P front camera with a wide angle lens, a 5 element one.

The camera UI is very simple and on the left side we find the Settings, with options like object racking, capture smiles, touch to capture, touch plus hold to burst and the resolution (13 megapixels – 4160 x 3120 in 4:3 or 10 MP at 4160 x 2336 in 16:9). The options list continues with timer, ISO up to 800, white balance, exposure, saturation, contrast and brightness. In the Video section there’s object tracking, stabilizer, Full HD resolution (16:9 stereo). Finally there’s beauty mode and options to use the volume buttons for camera features. Then there’s GPS tagging, save to SD card and flash options. 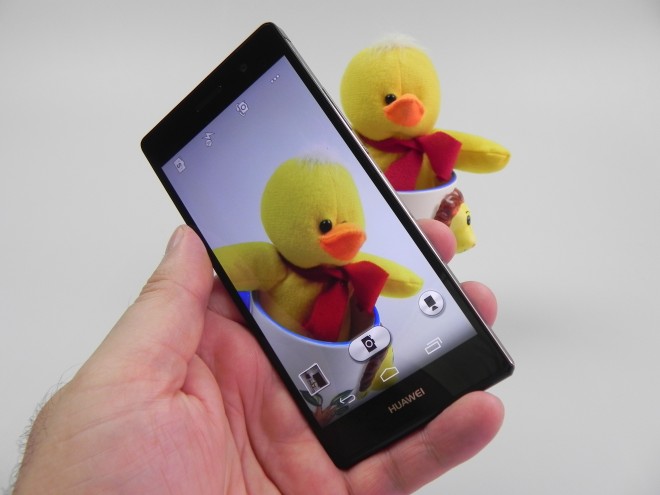 The capture Modes include Normal, Smart (Enhance Quality based on surroundings), Beauty, HDR, Panorama, Filters, Audio Note (pictures plus 10 seconds of audio), Best Photo, Audio Control and Watermark. This camera does 4X zoom and the day time photos are divided into albums, times, locations and people. The photos taken during daylight are crisp, bright, burnt and oversaturated. The colors are vivid and we’ve got a HDR shot with a fountain that’s slightly exaggerated.

The panorama has stitching problems and is taken at 360 degrees. We also tested the filters and I’d say the pictures are pretty good for the price. It’s hard to take macros, but in the end we achieved a nice one with white flowers. Details are OK, colors are warm and there’s frankly more noise here than on other 13 megapixel snappers. I would compare the quality of this device to the one of the Galaxy S4 to be honest. 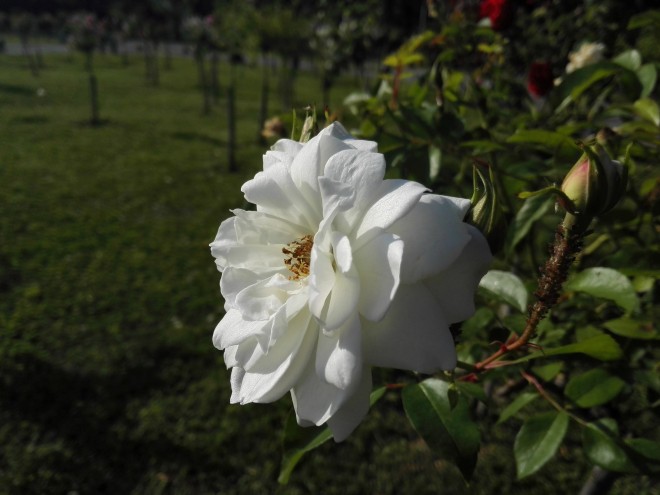 The front camera does panorama selfies, it has a 10 level beauty slider and in spite of the promise, it’s below the 5 MP front shooters of the latest HTC flagships. On the video side, we’ve got 1080p 30 FPS capture, pretty bad audio and too much brightness for some reason. The videos are also not very crisp considering the high res of the camera. Everything feels underwhelming, maybe apart from the electronic stabilization. The videos are shot in MP4, the zoom quality is poor and the sound is stereo, while the bitrate reaches 20 Mbps.

You can also do a bit of photo editing, with filters, face options, crop, straighten, rotate, exposure, contrast, saturation and shadows, as well as frames. The conclusion is that the Huawei Ascend P7 has a 13 MP camera that’s beaten by many other 13 MP shooters. I would place it on the same level as the Galaxy S4, but with worse filming and poorer macros. However, for the price you’re paying, it should do its duty. 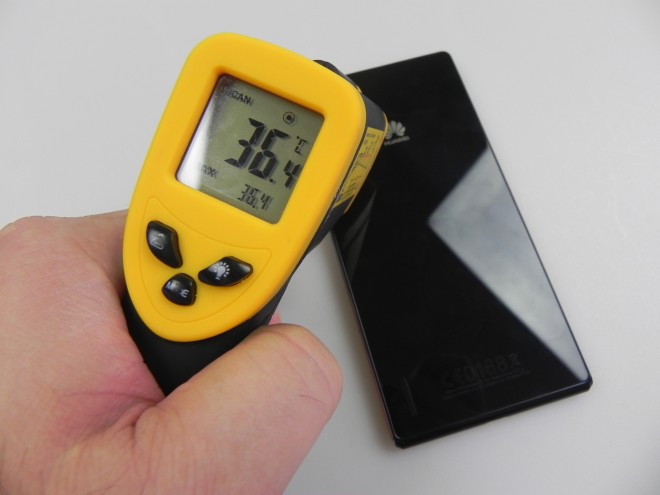 As far as performance goes, the device’s temperature is 36.4 degrees Celsius after playing 15 minutes of Riptide GP2, so this model doesn’t suffer from overheating. The web browser offers a reasonable speed, while the keyboard is not that well spaced, but at least we have Swype in the mix. On the cellular connectivity side, we’ve got a loud and clear experience, without distorsion of any kind.

There’s also smart dial, a pocket mode and harassment filter. And now let’s see the benchmarks, as we compared this model to the Nexus 5 and Xiaomi Mi3: 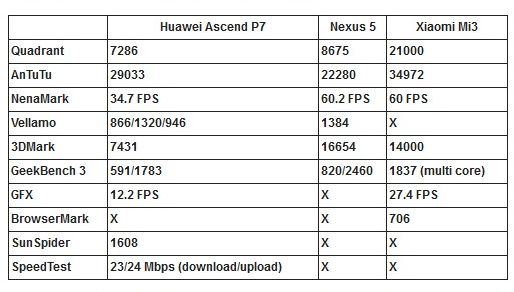 Those 3 models have similar prices and I have to say that judging by these scores, the GPU of the  Ascend P7 is kind of weak, which is also confirmed by the lag in Riptide GP2 and other 3D games. The OS here is Android 4.4.2 with Emotion UI 2.3 on top. There’s no app area, so all the apps are placed on homescreens. We’ve got folders with utilities and if you  keep the screen pressed you’ll trigger wallpapers, transitions (8 of them), widgets, thumbnails, edit Home (uninstall apps) and Simple Home (an intuitive alternative to the screen with a tile based UI).

The lockscreen supports a side swipe to unlock and a swipe up to trigger options like pause/play (for wallpapers), calendar, calculator, flashlight and mirror. In the dropdown area there are the Quick Settings and notifications. Icons are playful here, but not exactly flat or minimalistic. We’ve got old feeling settings icons and in the settings area we also found NFC, that we demoed in the video review. 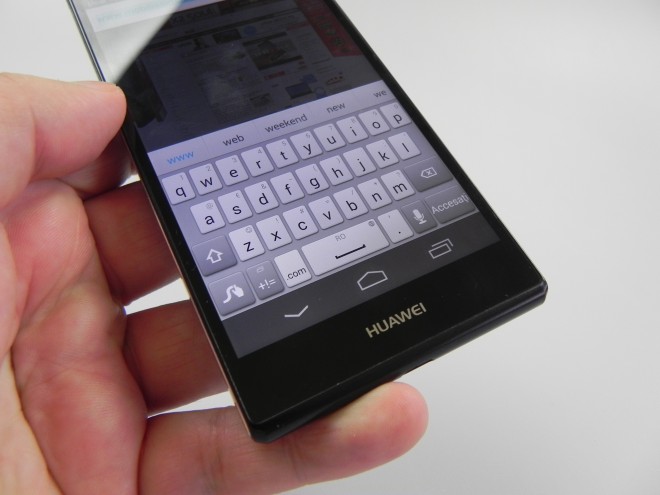 And now let’s see the verdict, the Pros and Cons. Here are the Pros:

Huawei Ascend P7 gets a 9.3 out of 10 for design, an 8.3 for hardware and an 8.5 out of 10 for OS and UI. The final grade is 8.7 out of 10, but this model is quite bad for gamers who want 3D games. If you want an OK display, good audio and reasonable camera for the price, this is your device, especially if you want a midranger with a hot design.