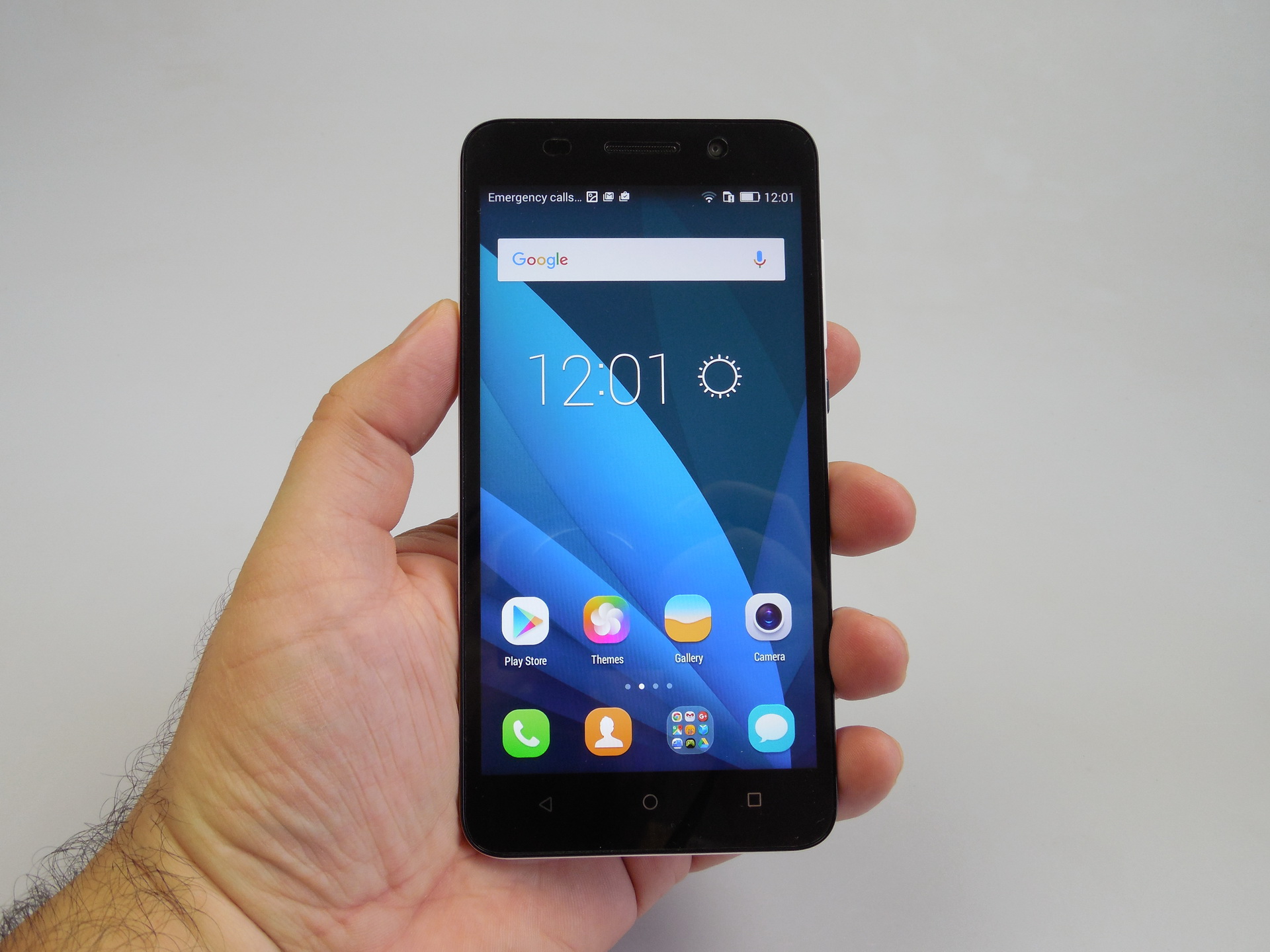 The Huawei Honor 4X is a midrange phablet and a HTC Desire 820 rival, that’s being reviewed over the following lines. This model can also be considered an ASUS ZenFone 2 rival and I mean the cheapest versions of that handset. Launched last fall, the handset is priced at around $150 and it comes after a series of other Huawei phone we reviewed and totally appreciated, like the Huawei P8, P8 Lite, Mate S, Honor 6 and Honor 6 Plus. 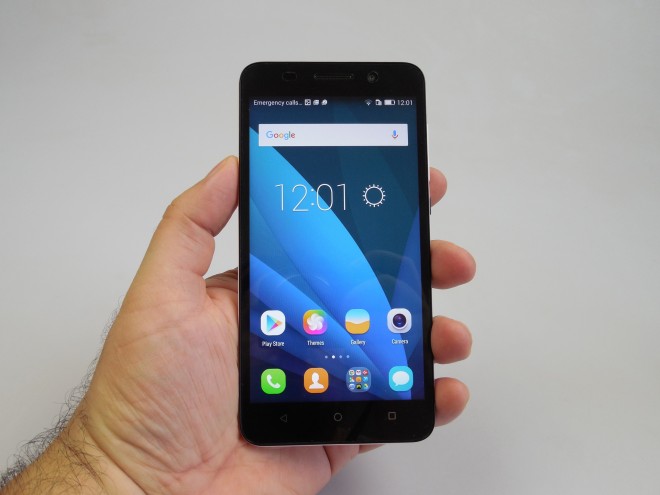 Huawei Honor 4X brings to the table an 8.65 mm thick chassis and it weighs 170 grams, which means it has the same weight as the ASUS ZenFone 2 Laser. It’s also thinner than that model, that measures 10.8 mm in thickness. Meanwhile, HTC Desire 820 is both skinnier and lighter, at 7.7 mm and 155 grams. Honor 4X uses a plastic case, with a back that feels like a twig basket, texture-wise and it also sounds a bit hollow.

The handset is comfy to hold and use, but one hand usage is limited. This model is 5 mm shorter than the HTC Desire 820, so at least it’s not exaggerately long. The build doesn’t feel very solid, sadly. This smartphone’s front side is a bit of a fingerprint magnet and the screen protection is already attached. Also at the front we find big bezels, an earpiece, front camera, notification LED, sensors and capacitive buttons, that don’t always respond well to presses. 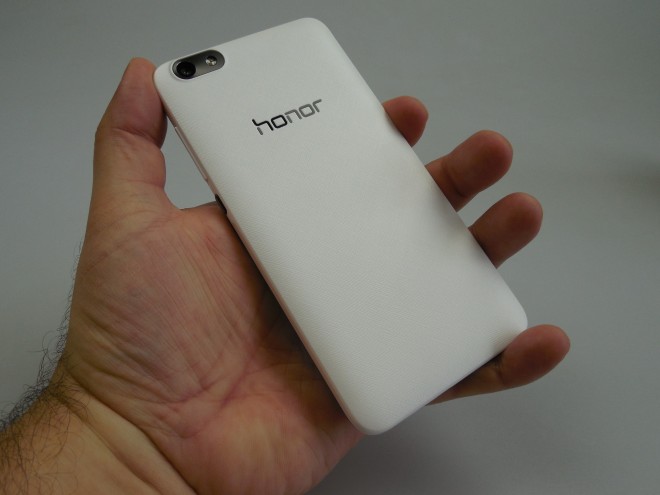 At the back there’s the main camera plus LED flash and a cover that’s easy to remove. Below it there’s the non removable battery, a microSD card slot and the micro SIM slots. At the top there’s the audio jack and microphone, while at the bottom we find the speaker, microUSB port and another microphone. There’s nothing on the left side, while on the right you can find the volume buttons and Power button, all of them comfy to use and offering good feedback.

Huawei made a compromise here in material quality, but this remains a comfy phablet and one that’s not very bad looking. Moving on to the hardware, this is where we find a 5.5 inch screen, with an IPS LCD panel and  1280 x 720 pixel resolution, accompanied by an octa core HiSilicon Kirin 620 processor, clocked at 1.2 GHz. There’s also a Mali 450 MP GPU in the mix and this phone also has a separate Snapdragon 410 version. 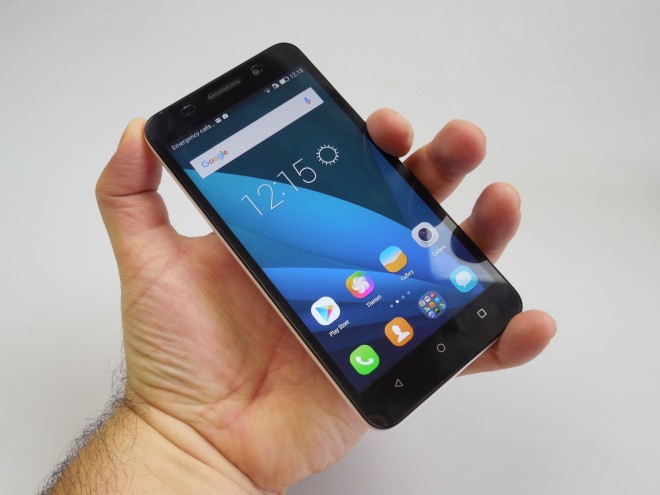 Specs include 2 GB of RAM, 8 GB of storage, of which only 3.65 GB are user accessible, plus a microSD card slot with support for up to 32 GB in extra storage. The back camera is a 13 megapixel unit, while the front one has a 5 MP resolution. On the connectivity front here are the options: Bluetooth 4.0, GPS, Glonass, WiFi b/g/n, microUSB 2.0 and LTE on both SIMs, but no NFC.

Sensors are the usual accelerometer, gyroscope, proximity sensor and Honor 4X comes with a 3000 mAh battery (Li-Po), which is the same capacity as the ASUS ZenFone 2 Laser and it beats the HTC Desire 820’s 2600 mAh battery. In our test that involves HD video playback in a loop, with WiFi on and brightness at 200 lux, we achieved 8 hours and 6 minutes of playback, which is OK for the price. 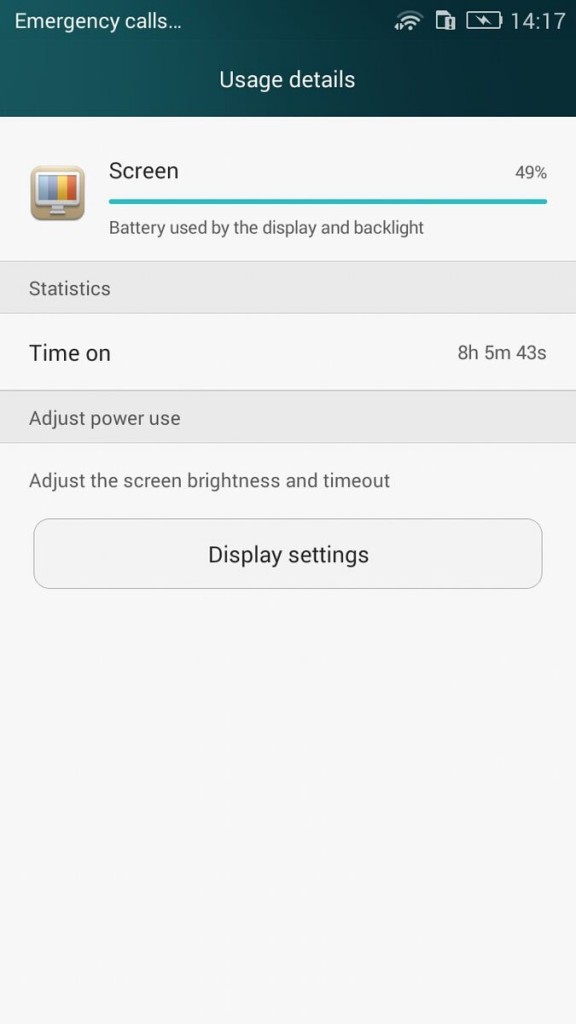 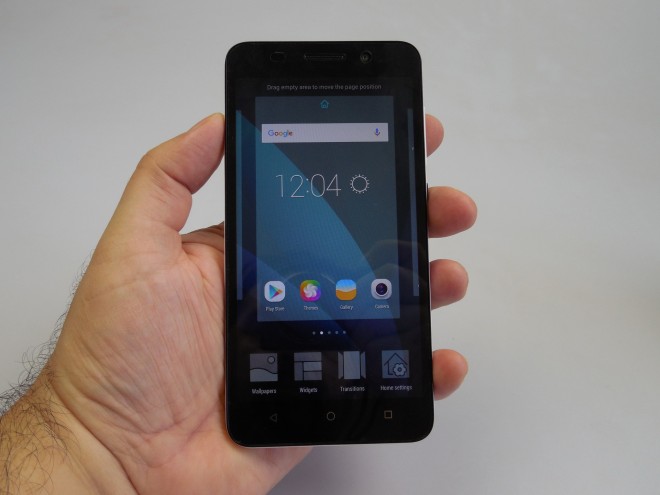 We also have special Power Saving settings available, with a Power Monitoring function, that finds battery “vampires” and optimizes usage. Then there’s the Ultra mode, that only lets calls and messages go through, shows a black and white interface and it’s able to double or triple battery life. Another use mode is Smart, that auto adjusts the CPU and network for a balanced use. 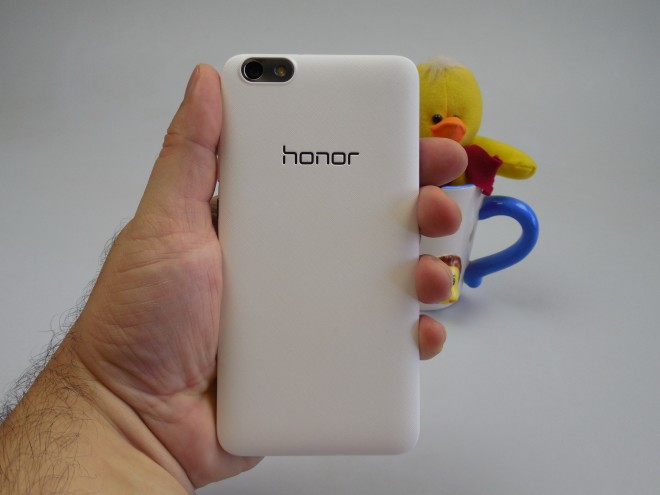 There’s only a speaker at the bottom of the phablet. The music player on the Honor 4X is a minimalistic one, typical for EMUI and it only offers a timer and lyrics, no equalizer. When you start playing a tune, you’ll hear it loud and clear, with an OK bass, but also with a bit of distortion at max volume. The good news is that even if you cover the speaker with your hand by mistake, you can still hear the song, game or movie. 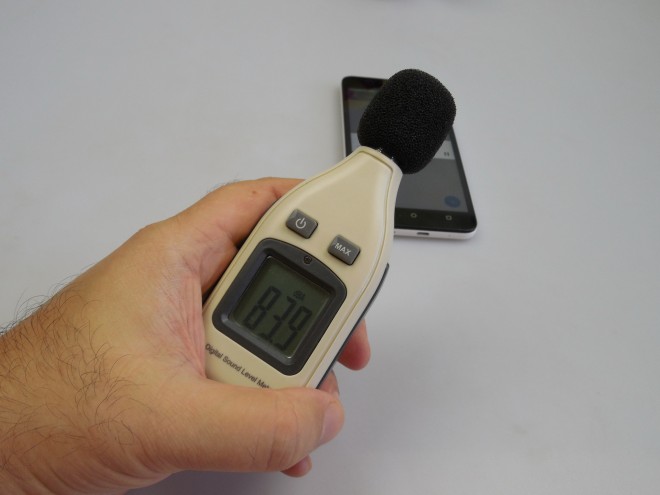 FM radio is in the mix too and we did a decibelmeter test on this model, achieving 83.9 dBA, which is a good value, narrowly beating the iPhone 6 Plus and its 83.8 dBA, but also the LG G Flex 2 and its 82.9 dBA. Louder models include the iPhone 6 (85.2 dBA) or the OnePlus One (90.5 dBA). In the Settings area you can activate the DTS mode, that makes the sound a bit louder and bass more prominent.

Overall acoustics are reasonably good and the screen is the next topic to analyze. We’re dealing here with a 5.5 inch IPS LCD display, with a 1280 x 720 pixel resolution, that’s fully laminated and a big fingerprint magnet. The video player on board has DTS functionality and the visual experience involves a bright and crisp image, OK color saturation and wide view angles. Contrast is good and the phone behaves OK in sunlight. 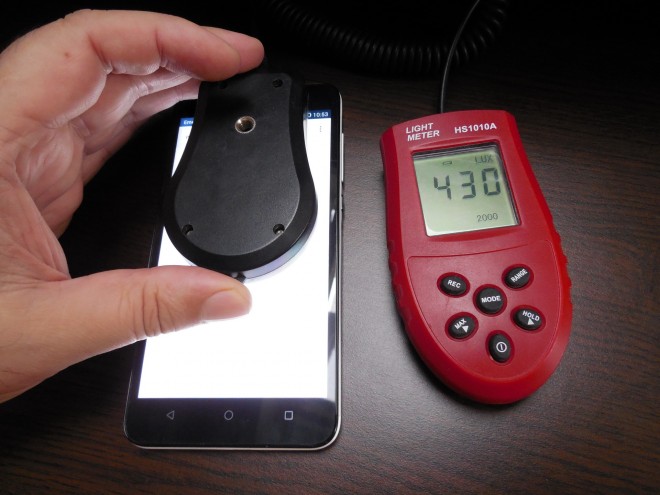 Settings for the screen include a color temperature slider, font size options and font style too. You can also increase readability in sunlight with another option, but I didn’t feel the need to do that. This is a very good screen for the price and I really can’t find anything bad about it. Now the camera combo is, typical for a Huawei model of the past year a quality one. 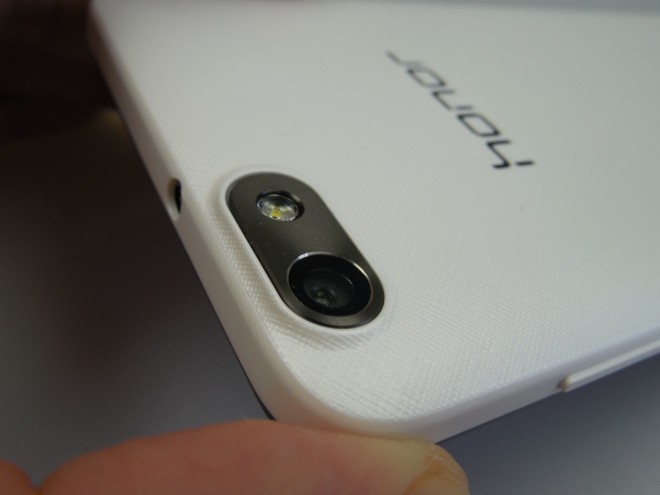 There’s a 13 megapixel main cam and a selfie 5 MP shooter. The main camera has F/2.0 aperture and a Sony sensor and its associated app starts up pretty fast. The UI is typical EMUI, with that forced portrait mode and skinny white icons. Capture modes include panorama, HDR, audio note, best photo, all focus and watermark and Settings include resolution (10 MP in 16:9, 13 MP in 4:3), GPS tag, audio control, timer and touch to capture.

There’s also smile capture, object tracking, touch and hold shutter/burst focus, volume button features and ISO (going up to 1600). You can activate the camera from the standby screen with a double press of the volume down key, with a surprisingly fast response. Back to options, there’s saturation, contrast and brightness, all tweakable too. 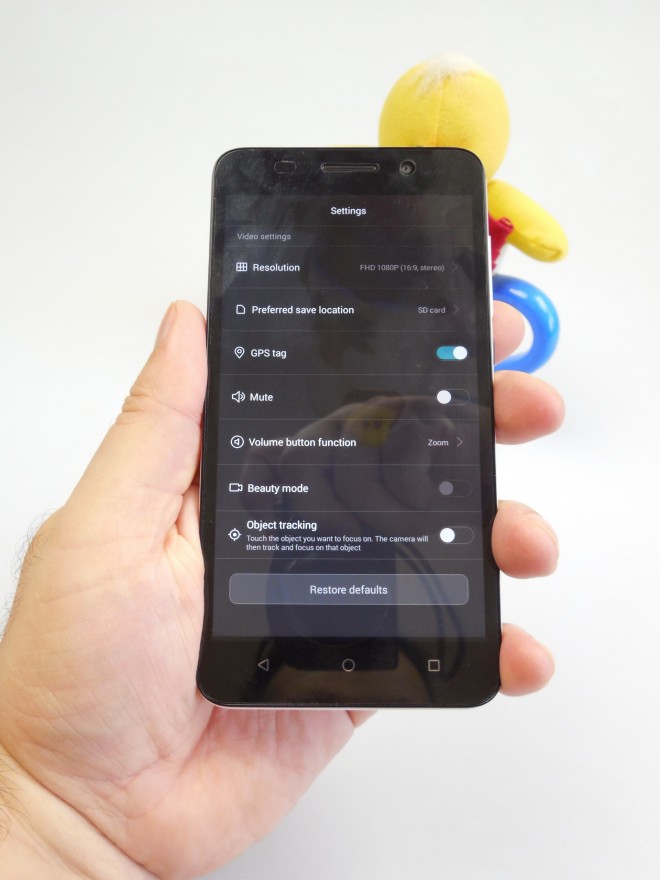 4 flash options (on, off, auto, torch) are here, plus filters to the right of the UI and a Beauty slider with 10 degrees. Video settings are pretty basic: FHD or HD resolution, Beauty Mode and Object Tracking. Selfies let you increase screen brightness, create panoramas, audio notes or take HD videos. The actual camera use day by day made me notice that the focus was fast, zooming in was fluid and there’s the exposure slider we’ve been getting accustomed to on the screen.

If you keep the screen pressed, you can adjust two crosshairs, associated to the metering point and focus. Picture taking is fast and we’ve also got an auto HDR thing going on. The gallery of shots taken with the Honor 4X camera was done in mid October, on a semi sunny day. It would help you understand more easily why we’re so excited about Huawei this year, judging by the fact we reviewed 5 Huawei phones already and all of them had great cameras. 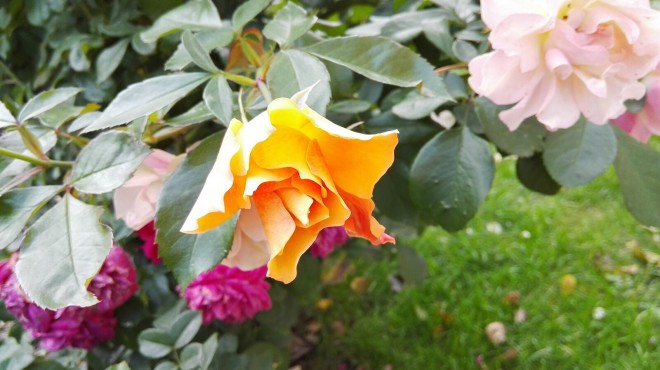 First we started with some teaser shots of the iPhone 6S unboxing, taken in very dim lighting, but sporting OK colors and nice flash illumination, plus good whites and nice texture. Then we went outside, where we registered color colors, OK details in landscape shots and a series of very clear images (not one blurry shot). Focus, white balance and exposure were all top notch.

Panorama was wide, with a resolution of 17728 x 2944 pixels and great details. I liked the texture of the brick of the church I photographed and loved the crisp flower closeups. All Focus with its refocus function was also nice to use and allowed me to create bokeh effects. Macros looked swell and even the selfie I took was OK. This is not Huawei P8 level, but still pretty good. 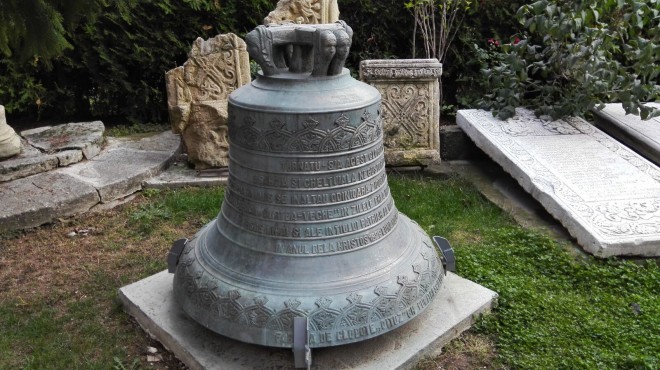 I liked the flower colors, found them realistic, even a bit cold. Monument textures felt right and the HDR was more discrete than usual. Some great details were caught here and there and flowers have to be highlighted for the quality of the shots they were part of. Gourmet indoor capture was also taken, in the shade, looking mighty fine. Overall, this is a great camera for the price and I would dare to put it on par with the Honor 6 and P8 Lite, when it comes to picture quality.

It beats my very own iPhone 5 and it’s better in landscape shots than the ASUS ZenFone 2 Laser. However, it’s less impressive than the Laser in closeups. This is clearly a better camera than the one of the HTC Desire 820. Videos were captured in MP4 format, 29 FPS, with a big bitrate of 23 Mbps. The first video was rather shaky, had detail loss when zooming in and a sudden exposure change.

The clarity and colors were OK. The second video was also shaky, but once again colors and details were good. The third video had poor stabilization and detail loss when zooming in, plus it was rather echo-ey and offered reasonably high level of detail. Overall, the Huawei Honor 4X does OK video capture, but it’s less impressive than the ASUS ZenFone 2 Laser in this department. It’s slightly above the HTC Desire 820 and on par with the Honor 6.

Editing is done with the usual rotate, filter, adjust and crop options, in a customized EMUI approach. We also tested the temperature of the device, achieving 41.5 degrees Celsius, after playing the game Riptide GP2 for 15 minutes, which is a bit hot, but there’s no massive overheating here. The preinstalled web browser is pretty fast and the virtual keyboard is not smartly spaced, especially since it has a very small space button. 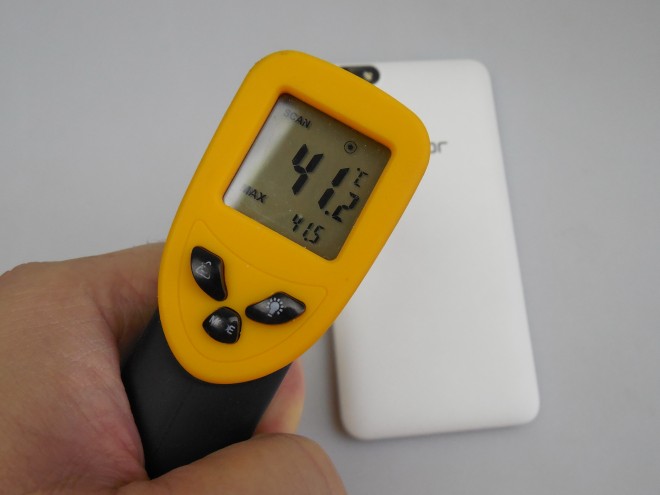 Swype works good though. On the connectivity front, there’s no NFC, WiFi a or WiFi ac, but we do get LTE on both SIMs. The GPS found us fast and LTE Cat 4 offers 150 MBPS download speeds. There’s no dual band WiFi here, but the signal of the WiFi connection is good. The dialer area offers Speed Dial, Privacy protection, a harassment filter and an OK signal and voice quality

Huawei Honor 4X only wins 2 out of 11 tests, or 3 out of 11 minus the Allview model. Strangely, it has the same specs as the Huawei P8 Lite, but lesser results. At least it has no lag and runs Riptide GP2 just fine. Still, the software here is kind of old: Android 4.4.2 with EMUI 3.0 on top and this is a typical EMUI affair, with no app drawer, flat UI and some iOS influences.

If you keep the screen pressed, you can access the wallpaper, widget and transition area, plus tweak the home layout. Multitasking is done with the aid of big thumbnails, much like on HTC Sense. The dropdown part features notifications, as a timeline, Quick Settings and the usual Do Not Disturb, GPS, One Hand UI and similar options. Settings offer screen style options, DND again, motion control (Draw letters to open apps on standby screen, dual tap to turn on and more), One Hand UI, Suspend Button, Smart Cover and Touch Disable Mode. 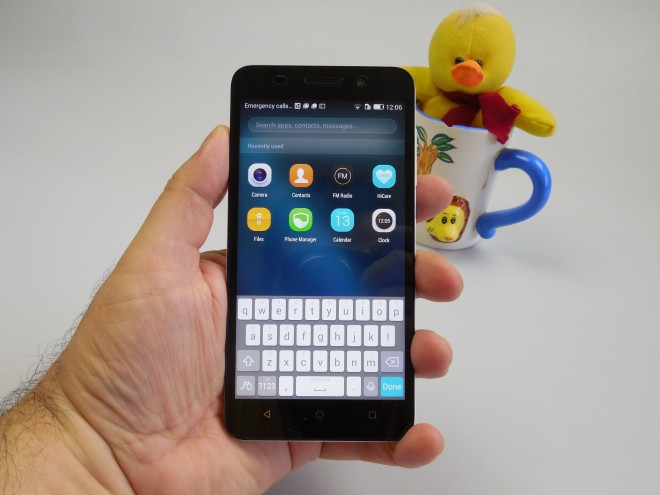 The preinstalled apps list is filled with bloatware, with over 50 apps to mention here. Here’s the list:

The lockscreen shows playback options and shortcuts to functions like record, calculator, torch and camera, if you swipe up. If you swipe down in homescreens you will trigger a Spotlight-style search area, just like in iOS. And now it’s time for the verdict!

As you know, we don’t grade handsets anymore, but we can safely say, this is a very solid purchase for less than $200. It has everything a young man and women needs, especially if he or she travels a lot: a good battery and display, good acoustics and surprisingly good camera. It’s basically a bigger Huawei P8 Lite, with lesser performance and older OS.