Home Android Huawei Honor 7 Review: Feels Like a Huawei Mate S Plus and... 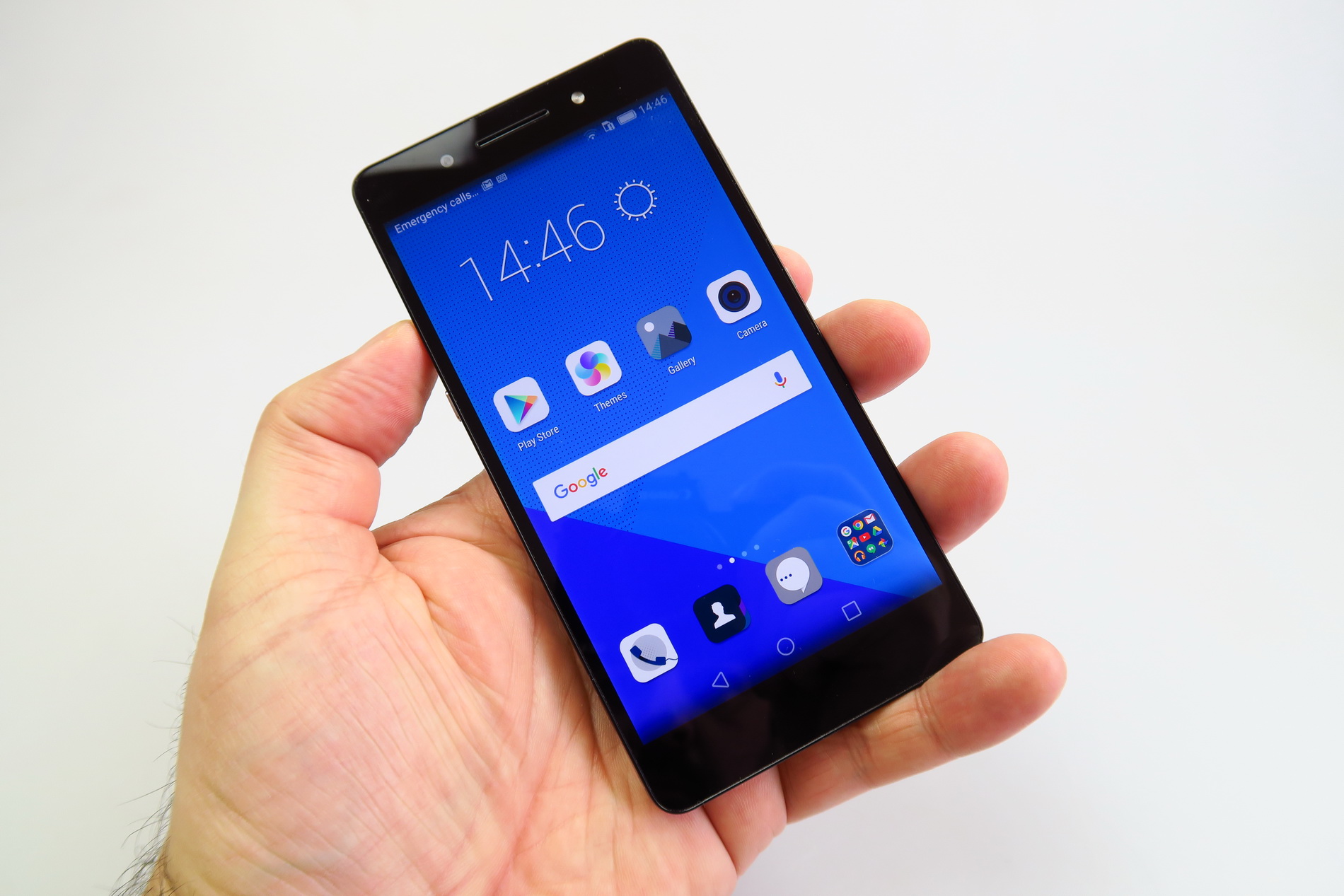 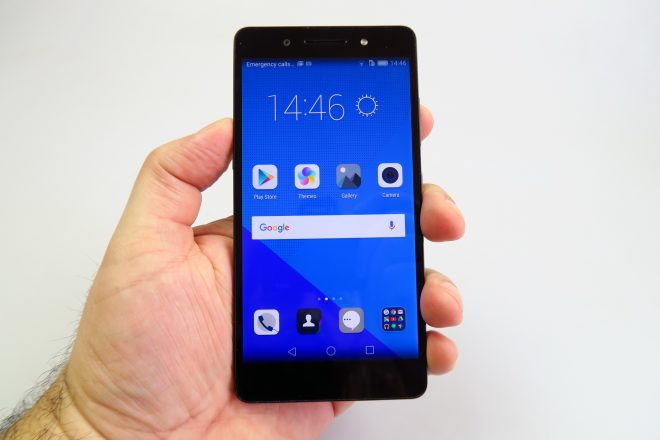 Priced at $400, Huawei Honor 7 has a metal unibody design and keeps the general vibe of the Mate S and Honor 5X, but it’s less elegant, while also being bulky and massive. Measuring 8.5 mm in thickness and weighing 157 grams, this device is beefier than the Honor 6 (7.5 mm and 130 grams), but it also increases the diagonal by 0.2 inches.

It comes with angular edges, meaning it’s not very comfy, but it provides an OK grip and OK one hand usage. This Honor handset has an OK one hand usage and a solid build, plus comfy buttons. It relies on aluminum and magnesium for its chassis, for improved heat dissipation. The back involves a plastic section at the top and bottom for antenna integration. 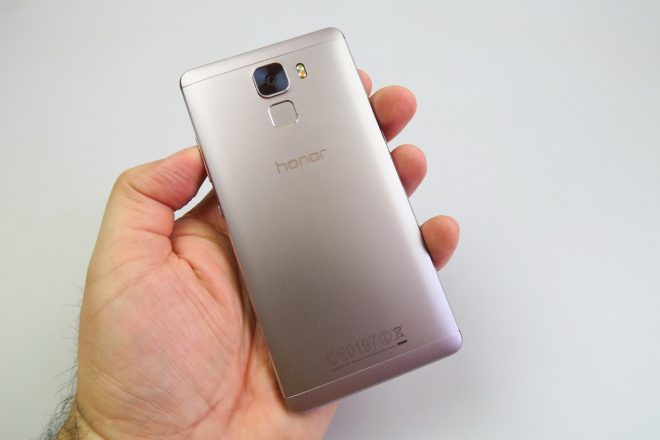 The camera is rather prominent and while this device has a premium build, it’s not very good looking, being surpassed in aesthetics by the likes of Huawei Honor 5X. Now let’s talk about the display. This smartphone uses a 5.2 inch Full HD IPS LCD made by Japan Display, with OK bezel thickness and 1500:1 contrast ratio.

The color saturation is at 85% (NTSC) and the video player on board has DTS functionality and play speed option. The viewing experience brought us cold coors, mid level brightness and poor contrast in the sun, as well as wide view angles. Pixels are of the RGB Stripes variety and the luxmeter showed a value of 340 LUX, which is underwhelming a bit. 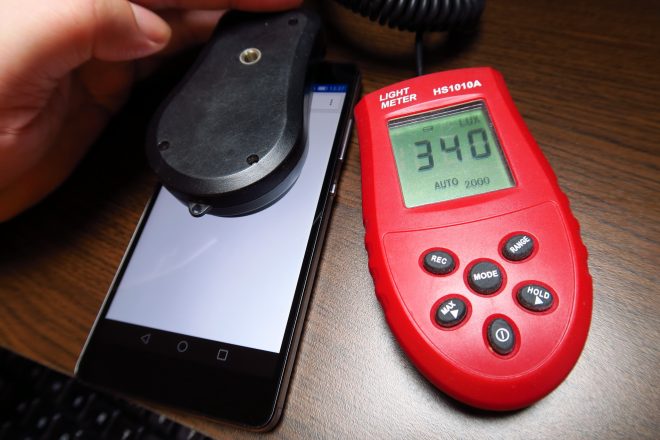 This value places the phone below the Huawei Honor 6, with its 399 LUX, plus below the Huawei P8’s 343 LUX. At least we surpassed the ASUS ZenFone 2. Settings include Color Temperature with a slider and font options. I feel that overall, the screen could have been better. It’s time to discuss the performance now. Honor 7 opts for an octa core HiSilicon Kirin 935, clocked at 2.2 GHz, with a Mali T624 GPU.

It’s the same CPU as the Mate S and it’s accompanied by 3 GB of LPDDR3 RAM, and 16, 32 or 64 GB of storage. The microSD card slot offers up to 64 GB of extra space and works as an alternative to the second SIM slot. The performance of the device is good, there’s no lag here and the functioning is more fluid than the one of the Huawei Honor 5X. 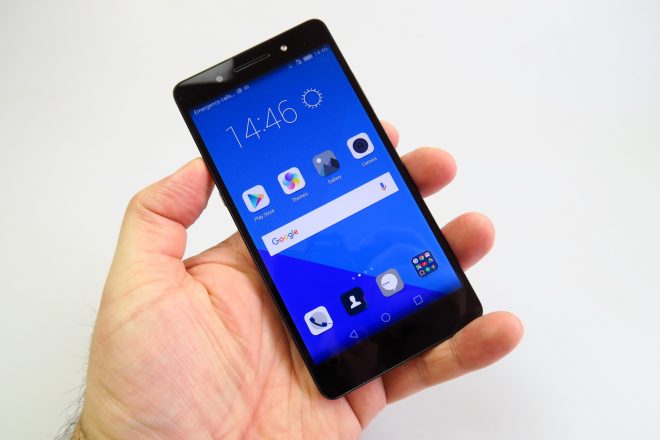 The phablet can run Modern Combat 5 without a hitch. Benchmarks are pretty much on par with the HTC One A9 and above the Huawei Mate S in some tests. The GPU felt rather poor in 3D tests, like GFXBench, even below the iPhone 5S or Huawei P8 Lite for example. It’s certainly not a future proof phone. We measured the temperature after 15 minutes of gaming and got up to 35.2 degrees Celsius, so there’s no overheating. 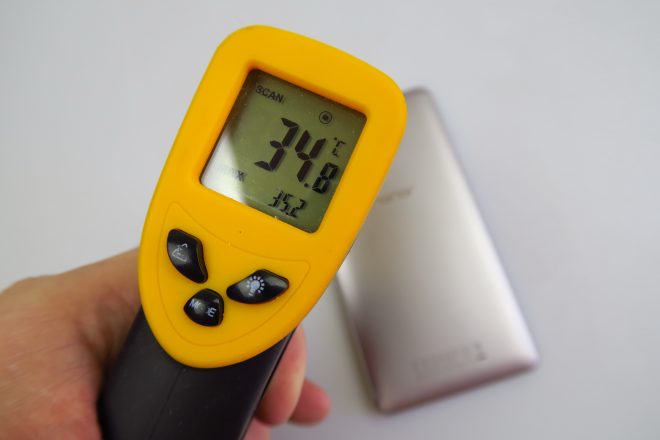 As far as audio goes, we didn’t get headphones with this phone and there’s a single speaker at the bottom left, in spite of having two grilles there. Also, the speaker is easy to cover, when you’re using the device in landscape mode. The music player is rather typical and minimalistic and comes with DTS tech. The experience involved an OK volume, no distortion and good bass, plus nice clarity. It reached good high notes without a problem.

We used a decibelmeter to measure speaker performance and got up to 81.1 dBA, exactly like the Huawei Honor 6, Mate S and Nexus 6P, but below the Huawei P8 Lite. The only special settings included here have to do with a Karaoke mode. Now we have finally reached the camera. 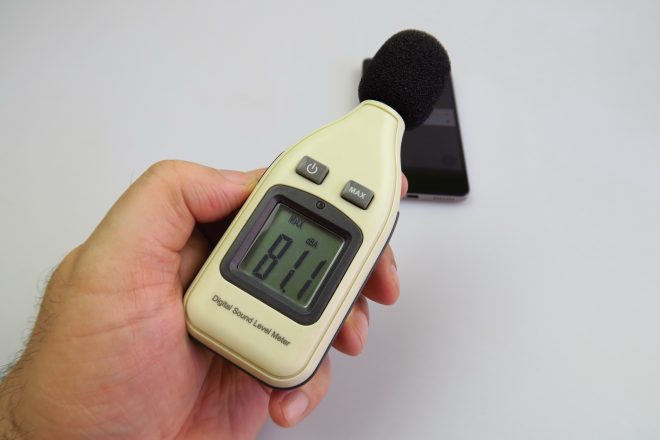 At the back there’s a 20 megapixel shooter, with a Sony IMX 230 sensor and 0.1 second phase detection autofocus. It also has 4:3 aspect, F/2.0 aperture, sapphire lens protection, dual tone LED flash and the sensor measures 1/2.4 inches. It’s actually the same sensor as the one from the Lenovo Vibe X3 and Xperia M5.

Upfront we get an 8 megapixel camera with LED flash and F/2.4 aperture. The camera app starts up pretty slow, has a fast focus and not a very fast picture taking. Zoom was rather fluid. The capture modes are Super Night, All Focus, Time Lapse, Pro, Slow Motion, Good Food and Light Painting. You can do Full HD video tops and also HDR video. 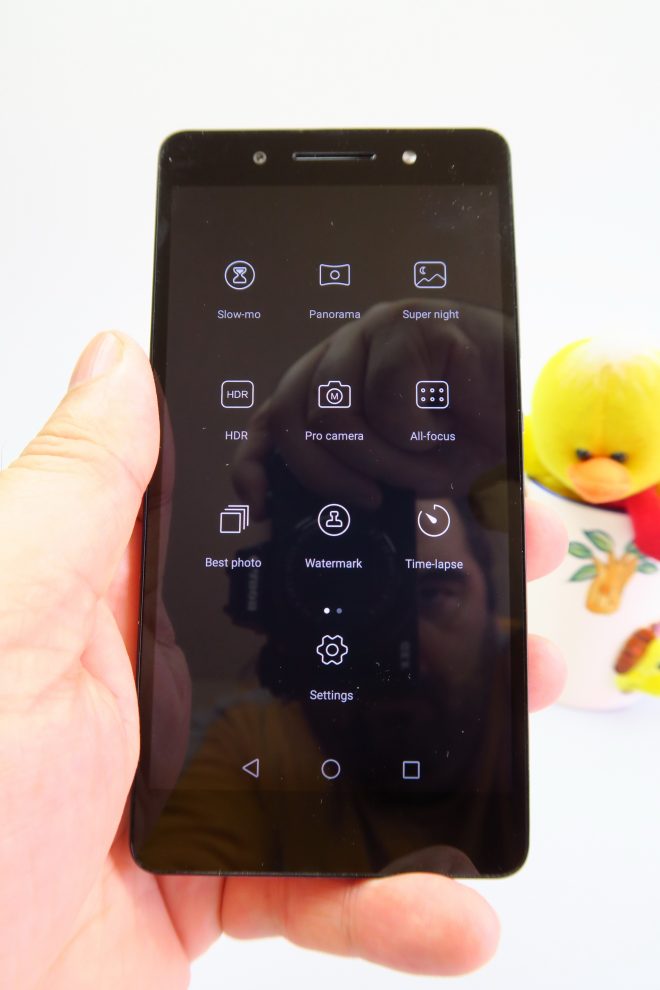 The Pro mode sub options include white balance, focus, exposure, shutter, ISO and metering. The gallery of shots we’ve taken was done during a sunny day and features great closeups, realistic colors and lots of details. That’s the tribute you pay to such a high resolution. Once you zoom in there’s not a big detail loss.

Panorama was wide and detailed and focus alternation between the foreground and background was nicely and easily performed. Closeups were perfect and we registered a nice texture of all objects photographed. The selfie was rather good, but it felt too over sharpened and artificial. Colors and clarity were good in the same selfie. 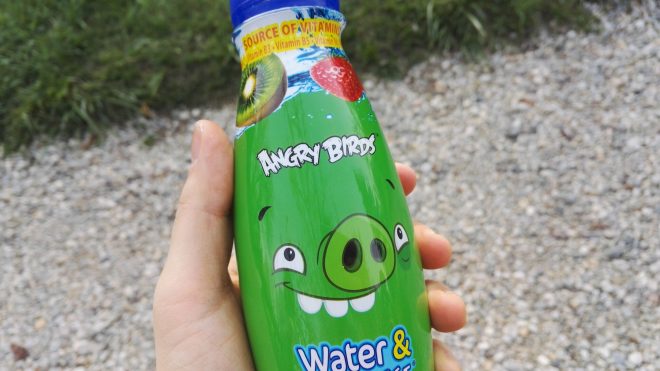 There were some burnt shots, on account of a very sunny day and very nice closeups of flowers were included. We also have some shots of ants, that looked spectacular and they actually brought more detail than the eye can see. Good Food mode did its job fine, but in the end the icecream shots felt inferior to the ones taken in a similar situation by the Huawei Honor 6 Plus.

Low light capture brought on a bit of grain, OK clarity and colors, plus some mist on top of the image and big halos. The flash was good and Super Night was magnificent, turning night into day. In the end, the low light capture is below the Nexus 6P, Nexus 5X and Huawei Mate 8, while the overall photo capture was on par with the Lenovo Vibe X3 and a bit above the Xperia M5. 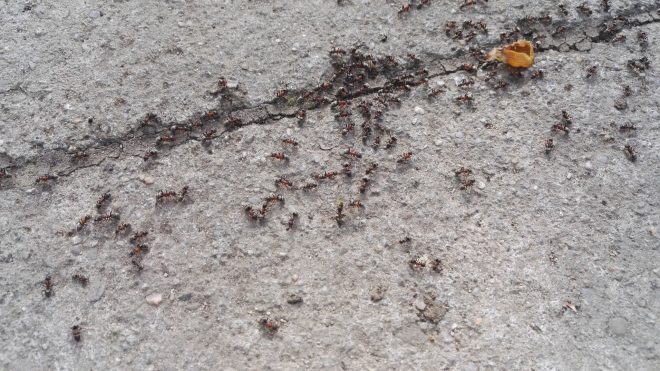 Videos were shot in MP4 format, in Full HD res and at a bitrate of 19 Mbps, plus frame rate of 30 FPS. The slow mo clip looked OK, but it was inferior to the fantastic ones done by the Nexus 6P. There was also quite a bit of detail loss when zooming in. The microphone was good and I have to mention there were times when it was hard to focus.

I liked the video of those moving ants, that brought forth good details. The same garden where we shot videos with this phone was used to test the Galaxy S5 camera years ago and even now the S5 seems to have handled it better. Low light filming was surprisingly good, possibly the best aspect of the phone. The microphone is also a highlight and the night time clarity and color were certainly top notch, surpassing quite a few phones.

Next up we’ve got the web browser, that’s not quite fast and offers mid level benchmark results. The keyboard included here is pretty comfy, features big buttons and Swype support. The connectivity of the Huawei Honor 6 involves LTE Category 6, with up to 300 Mbps in download speed, plus WiFi a/b/g/n/ac dual band, Bluetooth 4.1, GPS, Glonass and NFC. 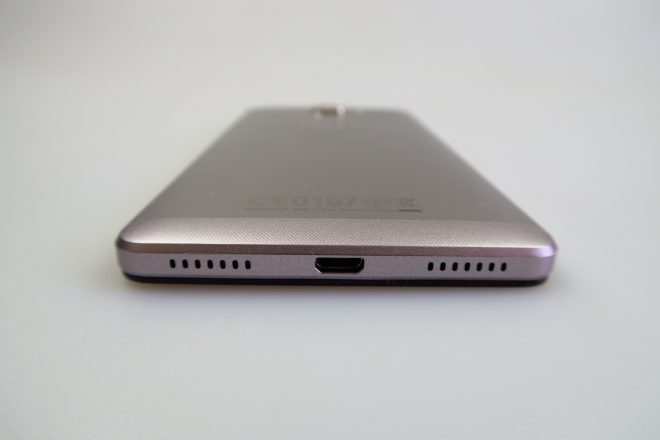 There’s also FM radio, microUSB and special technologies like WiFi+ and Signal+, that boost both types of connectivity. Calls are loud and clear and the microphone is great. So is the signal. Speedtest brought us a download speed of 23.94 Mbps and upload of 26 Mbps. Huawei Honor 7 packs a 3100 mAh Li-Po battery, with faster charging and the promise of 2.57 days of medium use.

With heavy use we’re supposed to get 1.2 days. On paper we are expected to get 1 hour of calling after 5 minutes of charging and 50% in 30 minutes, which we can confirm. We tested the video playback in a loop, achieving 7 hours and 35 minutes of playback, which is just OK. It’s still below the Huawei Honor 4X, HTC One A9 and even the lower end Xperia E4G. 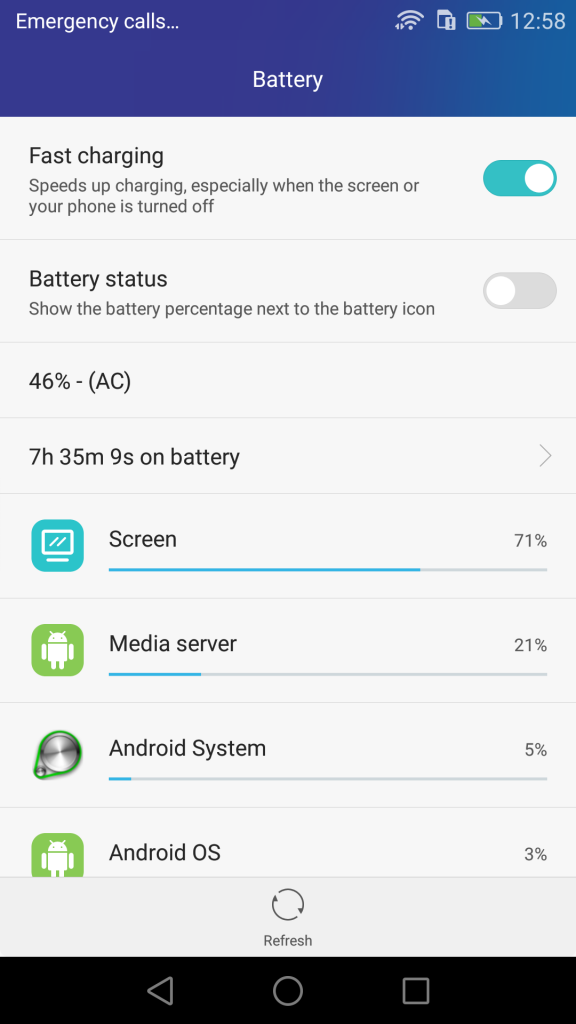 In PCMark we achieved 5 hours and 48 minutes, which is about the same level as the ASUS ZenFone 2 or the Xperia Z5. Still, the fact we’re below the modest Coolpad Modena is certainly no compliment. Charging is done in 1 hour and 55 minutes, which is just OK. Settings related to the battery include Power Monitoring and Modes like Performance, Smart and Ultra, each tweaking the CPU and network usage in a different way.

There are also protected apps and WiFi on or off during sleep. Time to talk about the OS, UI and apps. So, we’re running on Android 5.0.2 with EMUI 3.1 on top and the whole UI is very HTC Sense-like, with more gray and minimalism than we’ve seen on the Huawei Honor 5X. We liked the 3D and abstract wallpaper and multitasking is still based on thumbnails. 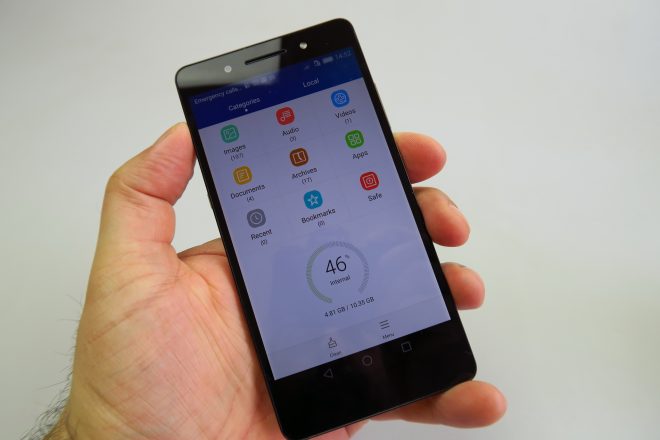 Pinching the homescreen reveals widgets, that are very nice looking, plus tweaks for transitions, layout and more. The lockscreen shows functions related to media playback and 4 shortcuts. Settings include homescreen styling, Do Not Disturb and of course fingerprint scanner options. You can use it at 360 degrees and it’s both fast and accurate.

There’s a 6 step setup that was performed very fast. You can also use the same sensor to go Back or Home, take a picture or video and answer a call, by tapping or swiping it. Swiping the sensor also reveals the Recent apps area. We also have voice wakeup, that makes the phone go ballistic if lost and makes it react to your voice by signaling it’s under the bed for example. 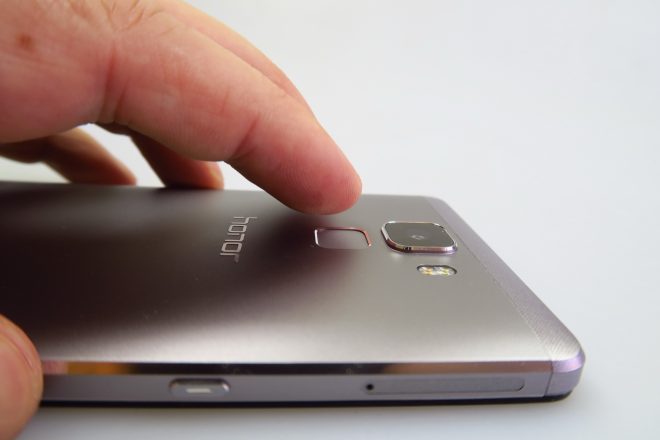 We’ve also got a special Smart Key physical button on the side (left), used to trigger the torch, voice recorder, screenshot or open a certain app, all of them customizable of course. Motion Control is in the Settings as well, with features like flip to mute, Knuckle functions, screenshot, drawing letters and nav bar options, as well as the One Hand UI. Suspend button and glove mode complete the list.

The preinstalled apps list includes 54 names, so yes, there’s a bit of bloatware here. Among them we find Themes, with options to customize a lot of aspects, from wallpaper to icons and more. Phone Manager and 4 games are also preinstalled.

This feels like a very solid Nexus 5X alternative, but one that’s better than the LG model, in some aspects. Things to remember are the great microphone, night videos, closeups, performance and it sounds pretty much like a youthful concert phone. It could also work as a journalist’s phone and gamer’s phone, in the end, maybe even a flagship replacement. The updated price of the device is here.