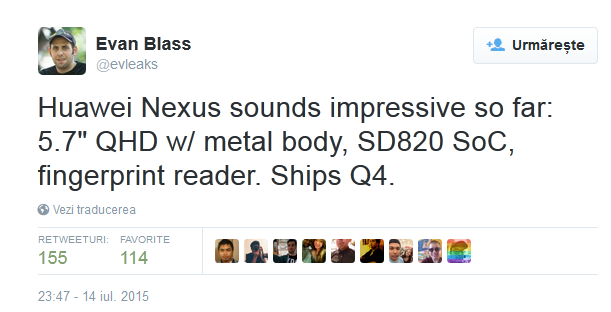 For the past year we’ve been hearing that Huawei will be making the future Nexus phone and only recently LG also appeared in cards as well. Now it seems both companies are making a Nexus model and the Huawei one gets a major leak today, courtesy of @evleaks.

He claims that the product will ship in Q4, with a metal body, a 5.7 inch Quad HD screen and a Snapdragon 820 processor. Last we heard, the LG Nexus 5 (2015) was getting some seriously impressive benchmark scores in AnTuTu, using the same CPU and 4 GB of RAM. The same amount of memory is expected on the Huawei Nexus, that will also bring a fingerprint scanner.

We’re very curious what the differentiation will be between the handsets, but judging by Huawei’s latest phones, that had excellent cameras, I’d say the back and front shooter. LG also had a good year when it comes to cameras, with both the LG G4 and G Flex 2 offering excellent low light capture. I’m very curious about the design choice, to be honest.