During this week’s IFA 2012 event in Berlin, ZTE unveiled its very first Intel-based smartphone, the ZTE Grand X IN. It runs on the Atom Z2460 processor, a single core CPU at 1.6 GHz with Intel’s Graphics Media accelerator at 400 MHz also involved, as well as 1 GB of RAM. 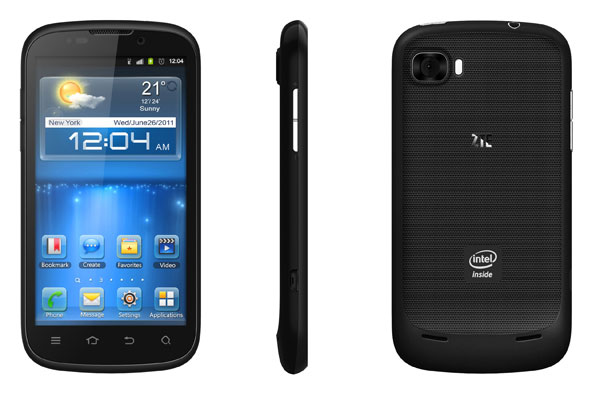 The handset comes with a 4.3 inch LCD display, with a 960 x 540 pixel resolution, good saturation and good brightness. Viewing angles are also praised by the people who saw the device in real life at IFA. ZTE Grand X IN runs Android 4.0 ICS and relies on Intel’s Smart Idle Technology to help the 1650 mAh battery offer a day of functioning time. As far as design goes, we get a plastic case, with a nice feel to the touch.

ZTE Grand X IN measures 9.9 mm in thickness, weighs 140.8 grams and at the back it sports an 8 megapixel camera with LED flash, while upfront there’s a 0.3 megapixel snapper. Internal storage is 16 GB, complemented by a microSD card slot and we also get NFC, Dolby Sound, FM radio, DLNA and HD voice in the specs list. The product debuts in September in Greece and Hungary and Germany, with a unsubsidized price of around 300 euro.