Could the surveys get any stranger? A recent ChangeWave Research study performed together with RBS Capital shows that 99% of iPhone 3GS owners are happy with their device. Of these, 82% are “very satisfied” by their devices and the strange part comes into play when we realize that the AT&T network is the most often mentioned dislike.

Meanwhile, 87% of Palm Pre users are happy with their handsets and 45% of them are very pleased with the smartphone, showing clearly that the iPhone 3GS is still the dominant device on the US market. Back to Apple’s new phone, the study mentions that the most liked aspect of the device is its touchscreen interface and the ease of use, while the top dislike is AT&T’s poor performance and the short battery life.

As far as Palm Pre is concerned, people also like its touchscreen interface, but also its support for multitasking, while its main flaws are the short battery life and lack of third party apps. Hmm, it seems that not even AT&T’s troublesome network isn’t able to keep iPhone fans from loving the device? 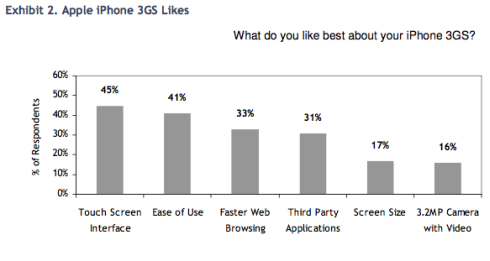