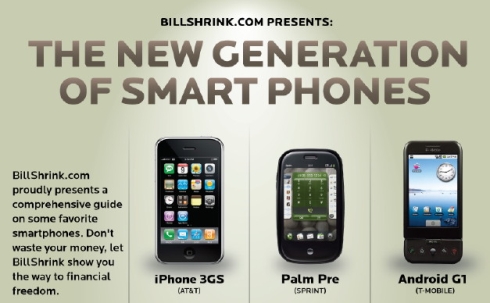 The iPhone 3GS comes in 16GB and 32GB versions, while Palm Pre features an 8GB internal memory and the  G1 only has 1GB, but there’s also a memory card slot on board for more space. All the three handsets come with batteries that provide the same talk time (5 hours, 3G), but the standby time is different: 300 hours for the iPhone 3GS and Palm Pre and a mere 130 hours for the Android G1.

The cameras are pretty close, with the G1 sitting on top of the list, thanks to its 3.2 megapixel unit with video recording, followed by the iPhone 3GS with the 3.0 MP sensor and video recording/editing and finally Palm Pre with a 3.0 MP camera. You’ll find MMS, WiFi, GPS on all 3 smartphones, plus voice commands and support for video and audio playback of most formats.

In the end, the most important reason for buying a handset (unless you’re filthy rich) is the price, but not only that, the total cost of the handset, including the 24 months of contract. Palm Pre is by far the best offer, coming at $99.99 and costing about $2,400 over 24 months. Meanwhile, you’ll play $3,240 for the Android G1 and $3,600 for the iPhone 3GS with the 2 year contracts and all.