Welcome to another round of display battle, courtesy of Phone Arena, that compared the screens on the iPhone 4, Nokia N8 and Samsung Galaxy S. To be honest, the N8 only made a short appearance, proving to be the most inferior device of the bunch, as it features an AMOLED display. Meanwhile, the iPhone 4’s IPS LCD was pretty bright, but certainly no match to the Super AMOLED on Galaxy S. 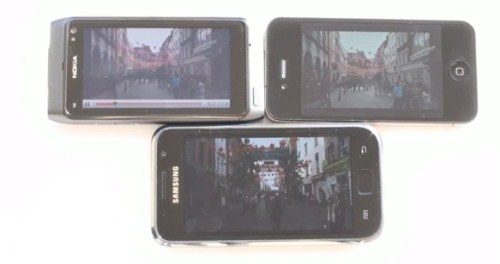 The first test exposed the displays to direct sunlight, showing that the Galaxy S has a screen with great contrast and saturated colors. Meanwhile, the IPS LCD on the new iPhone handled the sun well, but not as well as the Samsung smartphone, since the Apple phone’s colors were washed out.

Taking the devices inside a dark room, we were shown how the Super AMOLED behaves, specially when you change the viewing angle to 90 or 45 degrees. The experience is still top notch, while the iPhone 4 suffers and gains a yellow-ish hue. Galaxy S is officially the winner!