Here’s yet another iPhone concept, from the “wish this was on the market” series, but don’t fret, as we’ll get to see the real deal this summer! Before we witness the launch of the iPhone III, let’s have a look at Adam Hutchinson’s iPhone concept, the so-called “iPhone Magnet”, packing a magnetometer (digital compass). 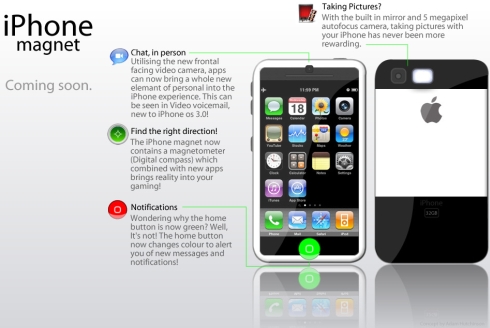 There’s also a 32GB internal memory on board, a front video camera, support for video voicemail, realistic games and a new feature that changes the Home button’s colour as an announcement toward the user.

The camera incorporated in this iPhone concept is a 5 megapixel unit, with autofocus support and maybe even video recording (natively).