Last time we saw an availability tool from Apple, it was in the summer of 2008, when the iPhone 3G demand was pretty heavy and supplies couldn’t match it. Now, the shortage affects all iPhone versions and the availability widget surfaced again on Friday. 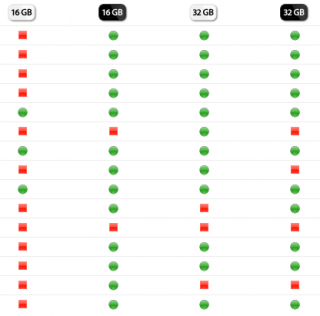 Only 29 of the 257 Apple store are hit by the shortage, but this problem could get bigger, as time passes. As of yesterday, the iPhone 3GS was shown as sold out in most states and in Kentucky’s only store, in Louisville, for example, the new iPhone was nowhere to be found.

The availability widget used this year seems more accurate than the one of 2008 and the 2009 version updates hourly, unlike its predecessor that updated daily. The shortage has struck quite a bunch of stores and we notice that Apple is having difficulties supplying the entry level white iPhone 3GS, mostly.

In Texas, only 3 of the 15 Apple Stores in the state still sell the 16GB model and we’ve yet to figure out if the demand is causing the shortage, or Apple’s rate of production.