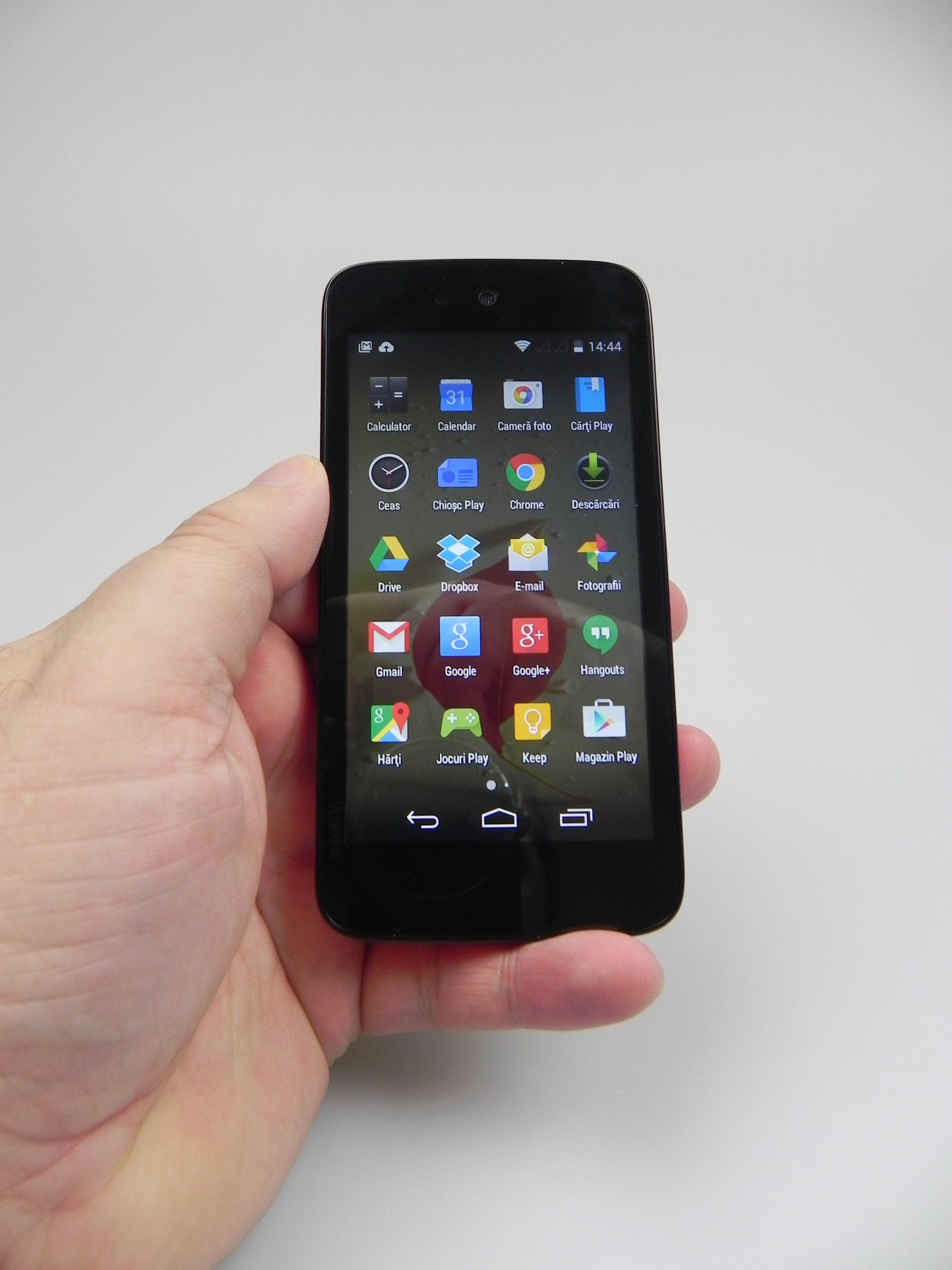 Karbonn Sparkle V is the very first Karbonn handset we’ve tested here at GSMDome.com and the very first Android One phone we analyzed. This unit was announced in September 2014 by the Indian company Karbonn, one of the Android One project partners. This one is a dual SIM phone, priced at $86, at least in India. 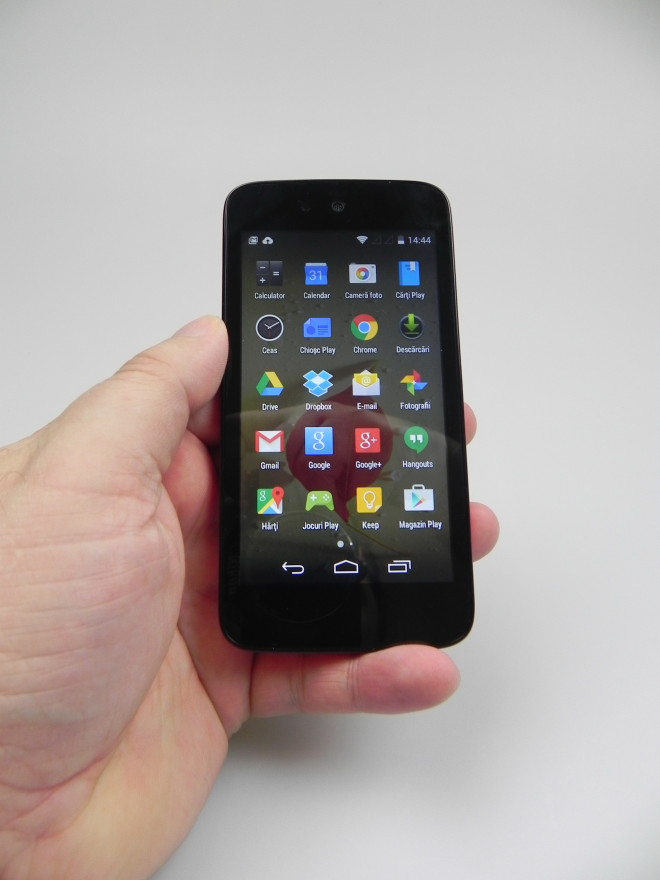 Our unit came with a bright red case, with good grip and I should also mention that the handset is easy to use with one hand. The front area is a fingerprint magnet and the handset is pretty thick, measuring 10 mm in waistline. The product weighs 138 grams, it’s slightly rounded and it has a wasted portion of the case below the display, where traditionally you’d find capacitive buttons.

Upfront we find the earpiece, with an original shape (rounded) and there’s also a front camera, sensors and notification LED. At the back there’s the main camera, flash and speaker and once you remove the red cover of the battery you’ll find below it two microSIM card slot, a microSD card slot and the battery. In the top part of the handset you can find the audio jack, while at the bottom there’s the microUSB port and microphone. 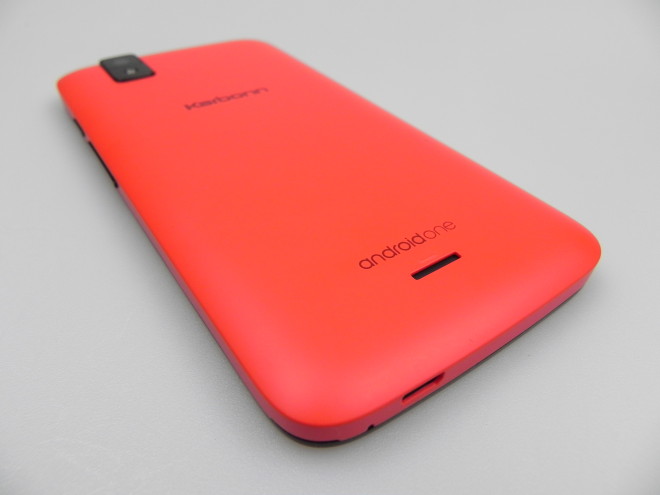 Nothing at the left, while on the right there’s the On/Off button and volume buttons, all of them with good feedback. Overall, the design is OK for the price of the device. It reminds us of a Wiko phone or a Lumia 520/530, as far as design approach goes. Moving on to the hardware, Karbonn Sparkle V comes with a 4.5 inch display, an IPS LCD with a resolution of 854 x 480 pixels, while inside the phone there’s a quad core Cortex A7 1.3 GHz unit.

This one is a MediaTek MT6582 processor, with a Mali 400 MP2 GPU. Other specs include 4 GB of storage, 1 GB of RAM, a microSD card slot with support for up to 32 GB, a main 5 MP camera and a front 2 MP shooter. On the connectivity side there’s WiFi, GPS, Bluetooth 4.0, two SIM slots, GPRS/EDGE connectivity and FM radio, as well as microUSB 2.0. Sparkle V also features an accelerometer, proximity sensor, gyro and G sensor, while the battery is a Li-Po unit with a capacity of 1700 mAh. 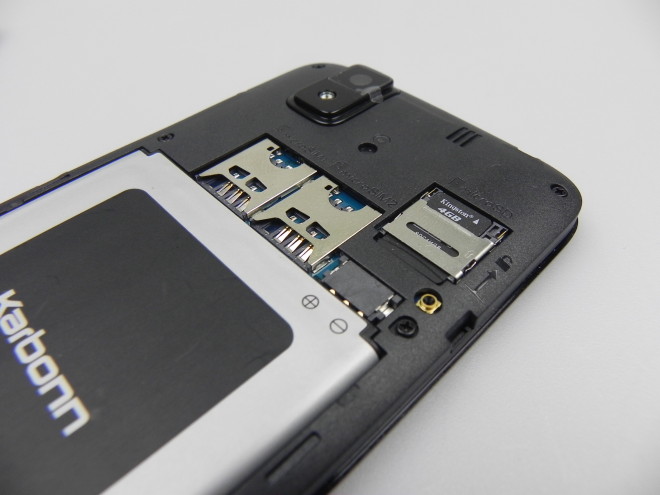 The battery is supposed to offer on paper 8 hours of talk time or 160 hours of standby functioning. In our test, that involves HD video playback in a loop, with brightness at 50% and WiFi on, we achieved 6 hours and 3 minutes of playback, that’s pretty OK. Charging of the battery takes 2 hours and 40 minutes, which is also reasonable. I didn’t like the fact that there was no option to show the battery percentage in the status bar.

There’s also a clear lack of power saving options here, but overall the battery is pretty much OK. Moving on to the audio side of things, this phone doesn’t exactly provide a high volume, but the sound is pretty clear and all notes are heard fine. We’ve got an OK bass, but there’s a slight muffling of the sound on a flat surface. In the Settings area of the Google Play Music app you’ll find the stock equalizer, with all the usual genre presets and channels. 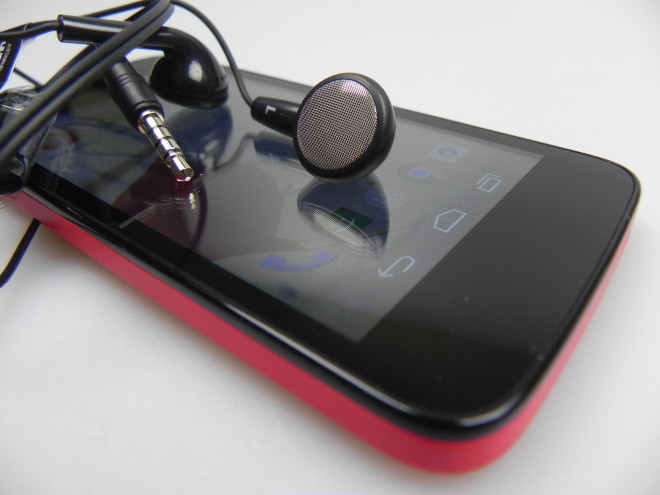 Considering the sub $100 price you pay for this phone, I’d call the acoustics just fine. Moving on to the headphones, they come with a resilient wire, a big remote and they provide decent volume and clear sound. The bass is a bit of a letdown and there’s a slight bit of echo going on here. Karbonn Sparkle V offers FM radio among its features and we also used a decibelmeter to test out the handset’s acoustics, achieving 81 dBA at the back and 80 dBA at the front, not very impressive. 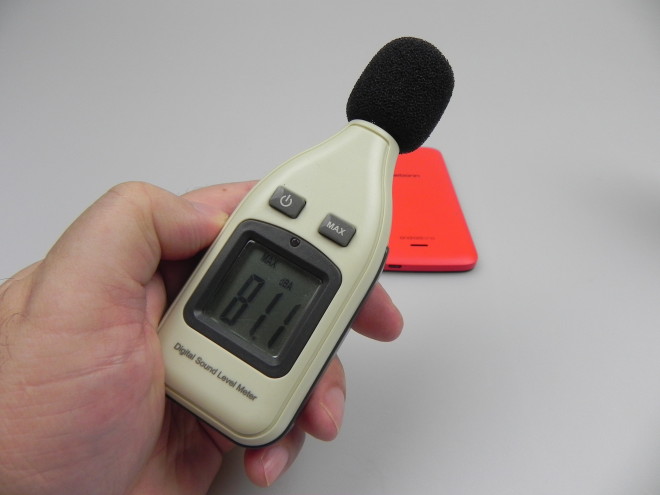 For example, Wiko Rainbow, a similarly priced lower end device achieves 87 dBA, so it can be done. Moving on to the display, Karbonn Sparkle V comes with an IPS LCD 4.5 inch screen with a 480 x 854 pixel resolution and the screen gives the sensation of a protection layer being applied to it. We don’t have a video player preinstalled on the device, so we had to use Photos for that purpose.

The display on the Sparkle V is pretty bright, but the colors are a bit washed out. View angles are wide and the contrast is OK. Pixels are of the RGB Stripe kind and the luxmeter test gave us 303 LUX units, which is a pretty OK brightness. Still, we’re not far from very praised smartphones from last year, like the LG G3 and its 343 LUX or the Xperia Z2 and its 366 LUX units. The screen is good enough for the device’s price and for a casual gamer and movie watcher. There aren’t any special settings for acoustics or display on this device, unlike other models. 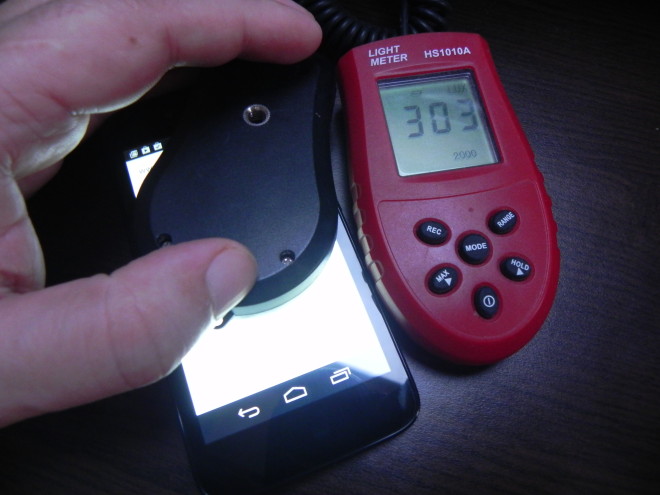 As far as the camera is concerned, we get a 5 MP shooter here, with autofocus and LED flash. It can only take pics when using a microSD card, since there’s not enough room for pics in the internal storage. The camera app here is Google Camera, in the official version, preinstalled on this model. Sparkle V is able to focus in a pretty slow fashion and picture taking is also pretty slow.

The UI includes features like Photo Sphere, Panorama, Lens Blur, Camera and Video in the left side of the screen, while on the right we find Settings. Among them there’s the resolution, with either 5 MP in 5:3, 4.9 MP in 4:3 or 3.7 MP in 16:9. You can choose 720p video capture, 1080p or 480p for video shooting and you can also choose the higher or lower resolution of the Panorama and Photo Sphere. 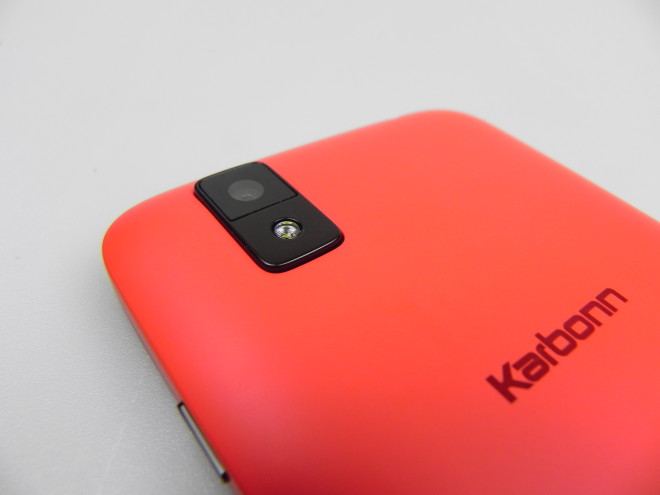 The quality of lens blur shots can also be tweaked and set to Normal or Low. Advanced options include manual or auto exposure and on the right side of the camera UI, without swiping, you can access a few shortcuts for features like front camera, flash options, HDR, timer and framing. The camera has a pretty fluid and fast zoom and now let’s see how it actually does in the photo capture area.

The photos you see here were taken during a full on blizzard, so I would say they’re rather impressive considering the conditions. The images look surprisingly well for these conditions. The colors are nice and the macro shots were pretty well done. There was some focus loss and speaking of focus, Lens Blur allows us to refocus after the shots are taken by tapping on the screen area in the background or foreground. 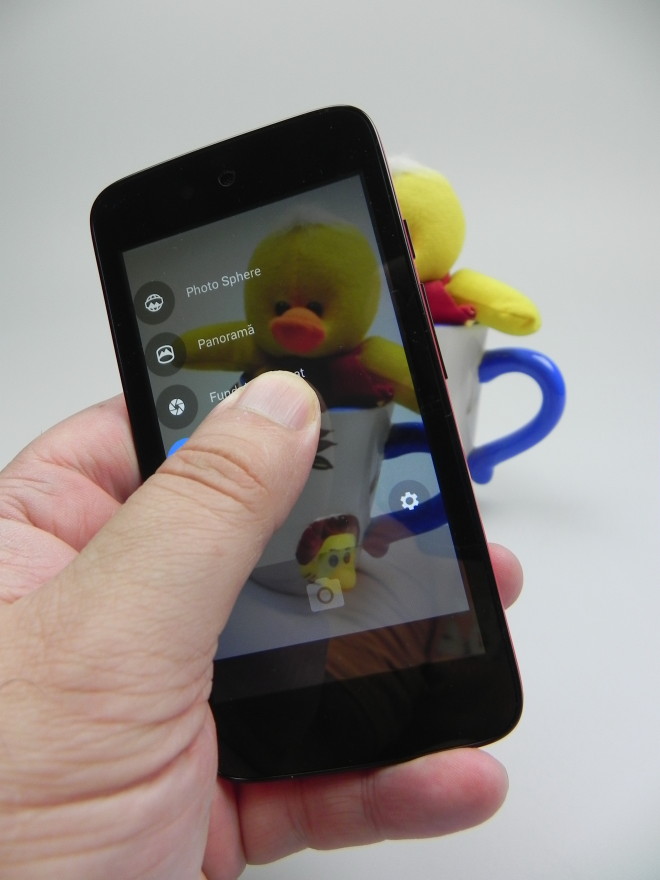 There’s also a slider for the blur level of the capture. HDR tends to burn the photos a bit, maybe because of the snow’s white, but we can’t guarantee that. Exposure and white balance were pretty good in these shots, as well as contrast. Considering the price tag and bad weather, I’d say the Karbonn Sparkle V handled admirably the task of taking photographs. This 5 MP shooter felt like an 8 MP shooter at times, which is a pretty good compliment.

Even the level of detail is good and the panorama looks nice. The panorama is also taken rapidly and the stitching is done just fine. As far as video capture goes, we recorded video in MP4 format, with not so good acoustics, but with pretty good video quality and OK colors. Focus loss happens quite often, sadly, but white balance and exposure are pretty good.

The quality of the shots is kept even when zooming in, yet another compliment for a 5 MP cam. The videos we took are Full HD 30 FPS ones at 16 Mbps bitrate. The camera is quite a pleasant surprise here and seeing how the phone now costs less than $100, it’s an excellent pic and video taking machine. Video editing options include Auto, Crop, Rotate, Looks, Tune Image, filters and varied frames. We then moved on into new areas, like temperature testing, where we achieved 40.6 degrees Celsius after 15 minutes of Riptide GP2, so there’s no overheating here. 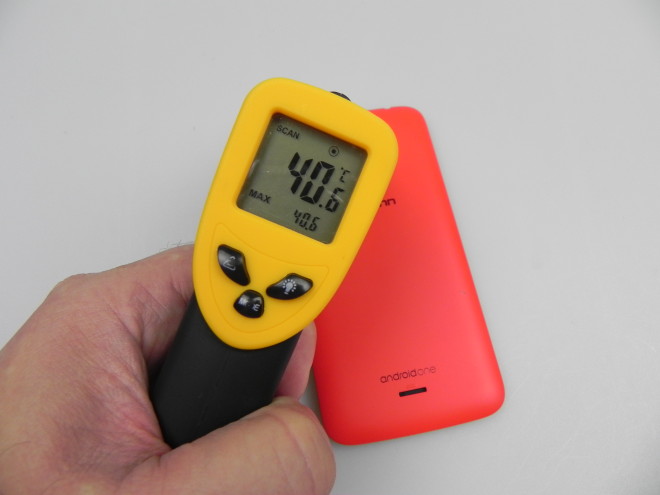 As far as web browsing goes, Chrome was there as the main browser, with a pretty good speed. The virtual keyboard is the stock one and offers great spacing and input, plus the ability to swipe between letters to compose a word. As far as actual phone calling goes, Sparkle V offers 3G support on both SIMs and provides an OK phone call quality, good signal and high volume during calls.

Now it’s time for the usual benchmarks, where we compared this model with the HTC Desire 310, Evolio Neos and Allview V1 Viper E. All 4 phones have 1 GB of RAM, except for the HTC unit and all of them have 4.5 inch displays. 3 of them share the same MediaTek quad core CPU, while the Evolio one goes with a weaker chipset. Here are the results: 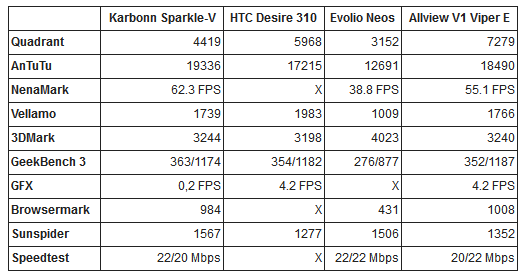 Karbonn Sparkle V wins 2 out of 10 battles, but it’s certainly better than the trio of models we compared it against, as far as fluid UI goes. It’s also better optimized, thanks to the Android One program. The device doesn’t suffer from lag and runs the benchmark game Riptide GP2 with no problems. The OS here is Android 4.4.4, in a stock version, with Lollipop on the way, as an update in the near future.

The latest stock Google apps are available here, including Gmail and Google+, plus Calendar and Maps. Android One is a Google program, that takes place in partnership with device makers and it’s destined for developing countries. The purpose is to offer the public handsets with stock software and fast updates, but also the latest Android features on board. Google handles security updates and the first wave of smartphones involves partners from India, like Micromax, Spice and Karbonn. 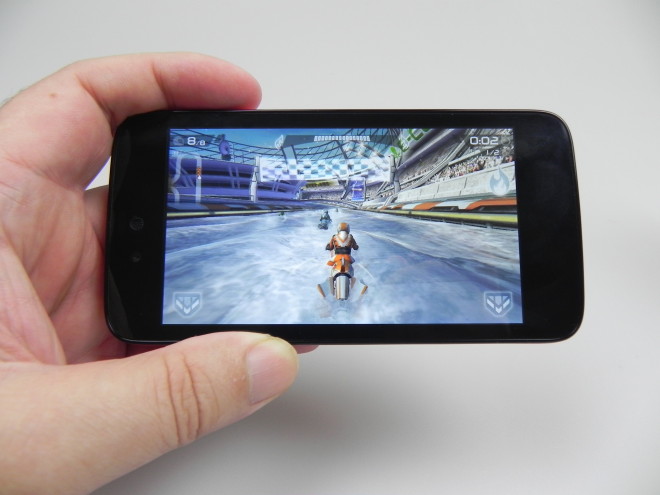 Sparkle V is promised to receive fast Android updates for 2 years following its debut, being kept in line with Nexus models. There’s a Google Now homescreen in the mix, stock widgets included here, the usual multitasking based on swiping and the usual Quick Settings in the dropdown area. Notifications are also present in the same part of the screen. There’s also OK Google support for fast voice search and overall the experience feels very fluid.

Karbonn Sparkle V gets from us an 8.8 for design, a 9.3 for hardware and a 9.7 for OS and UI. The final grade is 9.26 out of 10 and this one is certainly a must buy model for less than $100. It’s a fast phone, with fluid interface, surprisingly good camera and OK battery for its price range.