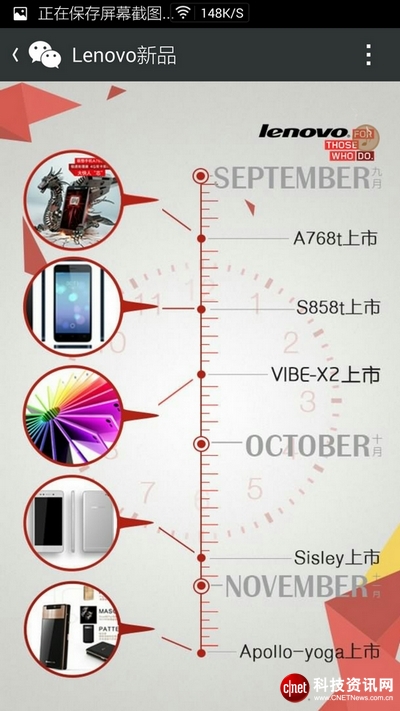 It appears it’s that time of the year when big companies leak their roadmaps, of either CPUs or devices, depending on what the company is. Lenovo just managed to leak a hefty bit of its roadmap related to smartphones and it’s looking hot.

The list includes 5 new models, some of them really nice sounding. There’s still IFA next month, that could include a launch of two, but this roadmap covers all the time leading to 2015, so it’s interesting. Starting it up is the Lenovo A768t, that was also recently spotted in the Teena database. This device is a 5.5 incher with a 64 bit processor (Snapdragon 410 most likely). It also comes with 1 GB of RAM, 8 GB of storage and an 8 MP back camera, as well as 4G LTE. This model could come at the end of September.

Then there’s the S858t, supposed to be very thin, maybe around 6 mm and also very light, at 99 grams. This is supposed to be a minimalist style device and resemble the iPhone 5/5s a bit. It also comes in September and moving forward, we’ve got the Vibe X2, supposed to be the successor to last year’s Lenovo Vibe X. This one is expected to have an octa core CPU, LTE and a fashionable design.

And then there’s Lenovo Sisley, with an October release date, a 6.9 mm waistline, 13 MP camera and a wide variety of colors. Finally, there’s Apollo Yoga, a name that reminds us of the other Lenovo Yogas out there and also makes us imagine a convertible phone of sorts. It could be a flip phone that rotates… Which of these models tempts you the most?