LG just teased a brand new device that we’ll be seeing in Barcelona at the end of the month and this time it’s a 5 inch device, that could serve as a rival for the Galaxy Note. I’m talking about the LG Optimus Vu, that will be accompanied by the likes of the Optimus 3D 2 and the quad core X3 phone at MWC 2012. 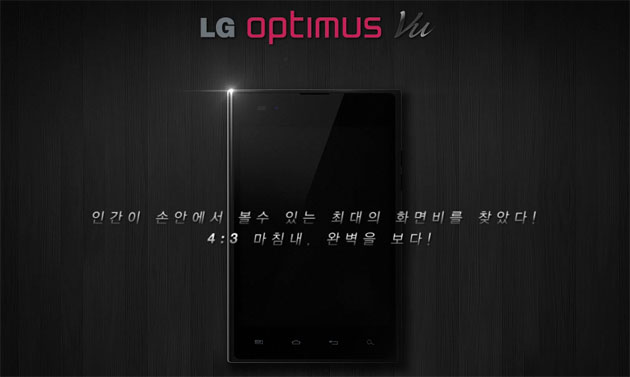 The teaser below showed up on LG’s Korean blog and the unique aspect about the phone is its rare 4:3 inch aspect ratio. LG Optimus Vu features a 5 inch 1024 x 768 IPS display, 1GB of RAM, 8 GB of internal storage and a dual core 1.5GHz Snapdragon S3 processor. The OS of choice is Android 2.3 Gingerbread and we also have among the specs NFC and an 8 megapixel camera. Another 4:3 aspect ratio device was the Pantech Rocket, that failed to take off in AT&T’s offer.

No idea if the LG Vu will ever leave Korea, but if it does, it could prove to be a Samsung Galaxy Note rival, since I’m expecting a very reasonable pricing here, considering the specs are underwhelming. A stylus wouldn’t hurt, either… Here’s the video teaser: