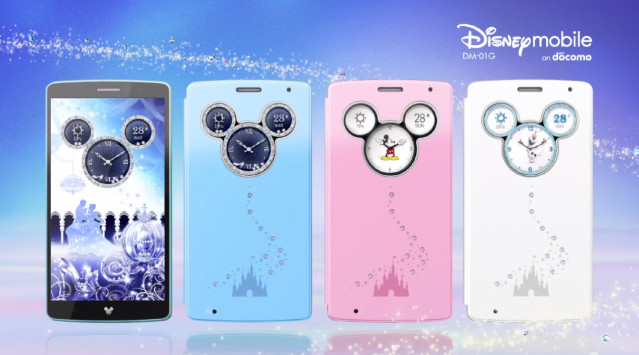 The LG G2 is the 2013 flagship of the South Korean company and the first mainstream phone with physical buttons placed at its back. It amazed many people when it debuted at the end of the summer of that year, especially through design. Well, the handset gets reinvented today, through a Disney Mobile and NTT DoCoMo partnership.

Now it’s known as the Disney Mobile DM-01G and it has also been upgraded a bit. It gets a Snapdragon 801 processor, 2 GB of RAM and 16 GB of storage, as well as a 5.2 inch Full HD screen. There’s a 13 megapixel main camera in the mix, with laser autofocus, a 2.4 MP front camera and a 2920 mAh battery. The Disney Mobile handset obviously has a ton of custom content and accessories related to Disney.

It runs Android 5.0 Lollipop with the LG UI on top, but also a few Disney widgets, themes, icons and wallpapers. The Quick Circle case has also been changed and now instead of the singular circular area, it has three of them, shaped like the head of Mickey Mouse. They’re also decorated with Swarovski crystals. Apparently, the product is also waterproof now.