Home Huawei Huawei Honor 7 Will Be the First Device on the Market with... 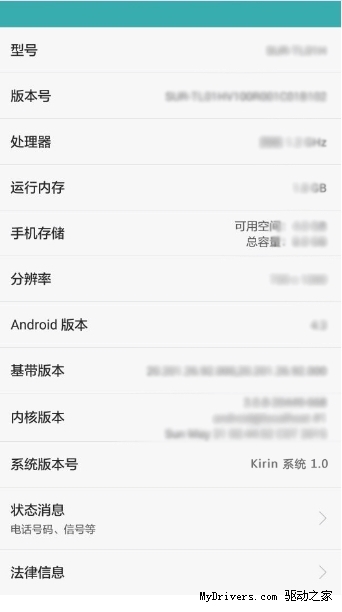 A month ago we heard some rumors about the fact that Huawei will develop its own operating system for mobile phones, OS called Kirin OS, just like the processors found at the moment on their devices. From a Chinese source we found out today that Huawei Honor 7 could be the first device in the series that will arrive on the market in two different variants: one with Kirin OS, and another with Android and Emotion UI.

As you can see from the screenshot above, the phone in case runs Kirin OS version 1.0. Unfortunately, the other info about the device are blurred. Getting back to Kirin OS, from our last post you found out that this development of this operating system started back in 2012, software created in order to reduce the dependence to other firms.

It remains to see if indeed, Honor 7 is Huawei’s first smartphone that will run this OS, and if the dedicated App store will be as great as Google Play or Apple Store. According to the latest leaks, Honor 7 will pack a 5-inch Full HD display, an octa-core Kirin 935 processor, 3 or 4 GB of RAM memory, 64 or 128 GB space of internal storage and a 3.280 mAH battery.