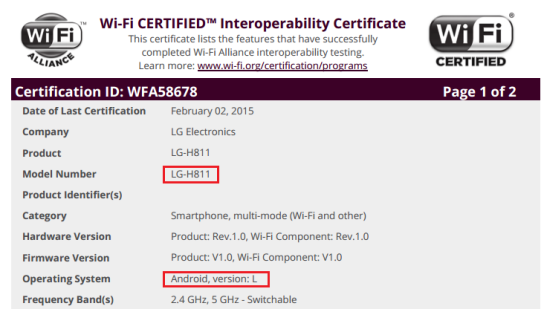 The LG G4 has leaked once or twice over the last few days, but it’s usually bits and pieces of info. Today we come across a fresh codename, that may be associated to the handset, as it gets approved by the Wi-Fi Alliance.

Back in January, the LG G4 seemed to appear on the web with the codenamed LG-H810, the AT&T version of the phone and now we come across the code LG-H811, certified by the above mentioned alliance. This means we’re dealing with another G4 version, ready to become commercial pretty soon. Sadly, the certification doesn’t reveal much info about the device, other than the fact it’s running Android 5.0 Lollipop.

From the grapevine we’ve heard the product may keep the 5.5 inch diagonal and some rumors even place a 3K resolution in the mix. There’s also talk about a decreased diagonal of even 5 inches, a Snapdragon 810 CPU and two versions of the handset, one with a Full HD screen and less RAM and the other with 3 or even 4 GB of RAM.