After the HTC One Series devices got benchmarked, rumored, leaked, announced and release, LG Optimus 4X HD is also ready to enter the market, but before that it has a bunch of benchmark leaks. This would become the second quad core handset on the market, that will immediately be compared to the Tegra HTC One X… Will it win? Let’s see the first tests! 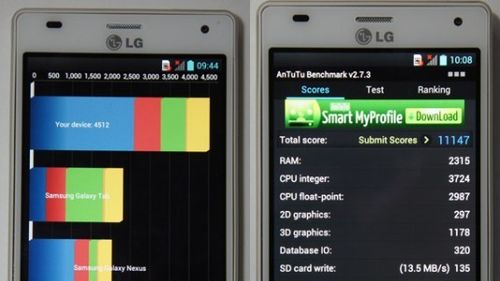 LG Optimus 4X HD is a Tegra 3 smartphone as well, one that managed to impress the folks of Techblog.gr, who put it through the Quadrant benchmark, the AnTuTu tests and NenaMark 2 as well. In Quadrant the device scores 4,512, while in AnTuTu it reached 11,147, more than the HTC One X, apparently. Meanwhile, the NenaMark2 score is a bit on the unimpressive side, but still manages to reach a good 44.5 fps. One must know before judging that the phone’s software isn’t finalized, so there’s work to be done here and optimization too.

As usual, we advise you to buy a phone depending on your own experience with it, not only benchmarks and theoretical marks. LG Optimus 4X has a 4.7 inch 720p display, 1.5GHz quad core Tegra 3 processor, 1 GB of RAM and 8 megapixel camera, plus Android 4.0 ICS as the OS. What’s not to like? This model will debut in May in the UK at least, while the US date has yet to be announced.